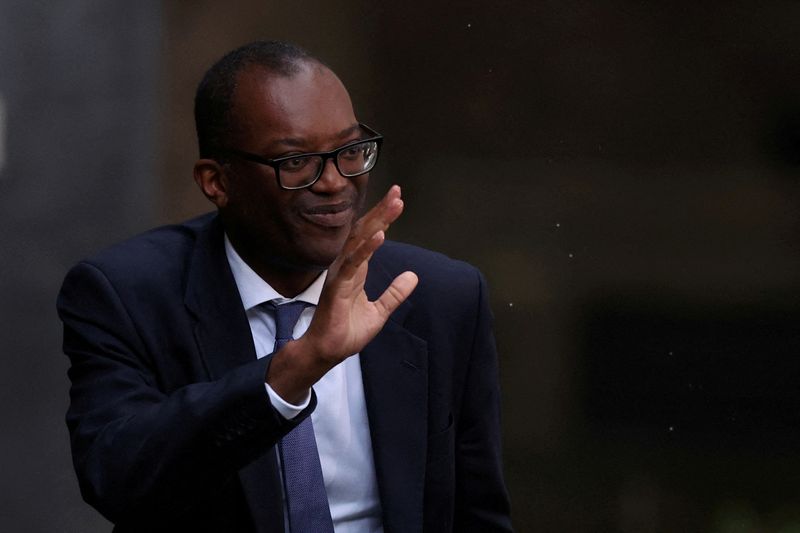 By David Milliken and Andy Bruce

Kwarteng scrapped the country's top rate of income tax, cancelled a planned rise in corporate taxes and for the first time put a price tag on the spending plans of Prime Minister Liz Truss, who wants to double Britain's rate of economic growth.

Investors unloaded short-dated British government bonds as fast as they could, with the cost of borrowing over 5 years seeing its biggest one-day rise since 1991, as Britain raised its debt issuance plans for the current financial year by 72.4 billion pounds ($81 billion). The pound slid below $1.11 for the first time in 37 years.

Kwarteng's announcement marked a step change in British economic policy, harking back to the Thatcherite and Reaganomics doctrines of the 1980s that critics have derided as a return to "trickle down" economics.

"Our plan is to expand the supply side of the economy through tax incentives and reform," Kwarteng said.

A plan to subsidise energy bills will cost 60 billion pounds just for the next six months, Kwarteng said. The government has promised households support for two years as Europe wrestles with an energy crisis.

Tax cuts - including an immediate reduction in the Stamp Duty property purchase tax plus a reversal of a planned rise in corporation tax - would cost a further 45 billion pounds by 2026/27, he said.

The government said raising Britain's annual economic growth rate by 1 percentage point over five years - a feat most economists think unlikely - would increase tax receipts by around the same amount.

Britain also will accelerate moves to bolster the City of London's competitiveness as a global financial centre by scrapping the cap on banker bonuses ahead of an "ambitious deregulatory" package later in the year, Kwarteng said.

The opposition Labour Party said the plans were a "desperate gamble".

The Institute for Fiscal Studies said the tax cuts were the largest since the budget of 1972 - which is widely remembered as ending in disaster because of its inflationary effect.

The market backdrop could barely be more hostile for Kwarteng, with the pound performing worse against the dollar than almost any other major currency.

Much of the decline reflects the U.S. Federal Reserve's rapid interest rate rises to tame inflation - which have sent markets into a tailspin - but some investors have taken fright at Truss's willingness to borrow big to fund growth.

"In 25 years of analysing budgets this must be the most dramatic, risky and unfounded mini-budget," said Caroline Le Jeune, head of tax at accountants Blick Rothenberg.

"Truss and her new government are taking a huge gamble."

A Reuters poll this week showed 55% of the international banks and economic consultancies that were polled judged British assets were at a high risk of a sharp loss of confidence.

On Thursday the Bank of England said Truss's energy price cap would limit inflation in the short term but that government stimulus was likely to boost inflation pressures further out, at a time when it is battling inflation near a 40-year high.

Financial markets ramped up their expectations for BoE interest rates to hit a peak of more than 5% midway through next year.

"We are likely to see a policy tug of war reminiscent of the stop-go 1970s. Investors should be prepared for a bumpy ride," said Trevor Greetham, head of multi-asset at Royal London Asset Management.

Despite the extensive tax and spending measures, the government had decided against publishing alongside its statement new growth and borrowing forecasts from the Office for Budget Responsibility, a government watchdog.

Kwarteng confirmed the OBR would publish its full forecasts later this year.

"Fiscal responsibility is essential for economic confidence, and it is a path we remain committed to," he said.