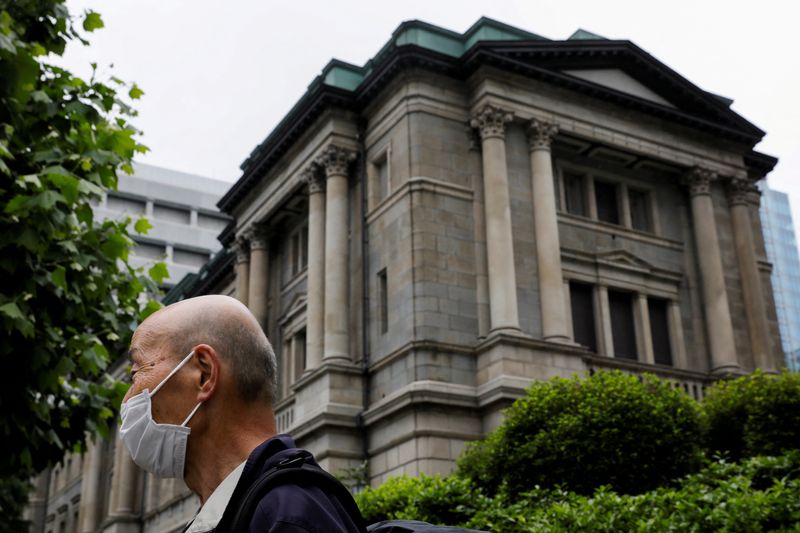 TOKYO (Reuters) - The Bank of Japan is expected to upgrade its price forecast next week as the impact of higher raw material costs trickles down to consumers, but stress its resolve to keep monetary policy ultra-loose with inflation well below its 2% target.

The central bank will flag risks from a recent spike in Omicron coronavirus cases but will likely maintain the view that the world's third-largest economy is headed for a moderate recovery from last year's pandemic-induced slump.

The BOJ is widely expected to maintain its short-term interest rate target at -0.1% and that for 10-year bond yields around 0%, at its two-day policy review ending next Tuesday.

"The BOJ could upgrade its price forecast but will still project inflation to remain around 1.5% in fiscal 2023," analysts at SMBC Nikko Securities wrote in a research note.

"That means a tweak to the BOJ's rate policy is off the cards this year."

Contrary to its U.S. counterpart struggling with surging inflation, the BOJ's focus so far has been to prevent a return to deflation as weak household spending and wage growth keep consumer inflation stuck around zero.

But recent signs of change in corporate price-setting behaviour have spurred debate among policymakers on whether they should brace for the possibility of an inflation overshoot this year.

Corporate and household inflation expectations have risen to multi-year highs, as a record spike in wholesale inflation led more firms to pass on rising costs to consumers.

The BOJ's "tankan" business survey showed an increase in the number of firms seeing retail prices rise. Consumers are charged more for goods ranging from gasoline to flour and cooking oil.

In a quarterly report to be released after the meeting, the BOJ is likely to raise its inflation forecast for the year beginning in April, sources have told Reuters.

Compared with its assessment in October, the latest report may emphasise rising inflationary pressure and a shift in the balance of risk on the price outlook, the sources said.

But many BOJ policymakers may prefer to wait for a further rise in wages to conclude that the expected up-tick in inflation, driven mostly by rising energy costs, will be sustainable, they said.

Governor Haruhiko Kuroda is thus likely to stress that monetary conditions will remain ultra-loose in Japan, even as the U.S. Federal Reserve has flagged several rate hikes this year.

The BOJ's report may also include an analysis on how rising commodity prices, rather than a weak yen, have driven up living expenses for households.

Such analysis would counter growing media and market commentary highlighting the disadvantages of a weak yen, which pushes up the cost of importing fuel and raw material.

Kuroda has repeatedly said a weak yen benefits Japan's economy by giving exports a competitive advantage. But he also said last month that a weak currency may be hurting households more than in the past due to the country's increasing reliance on imports.