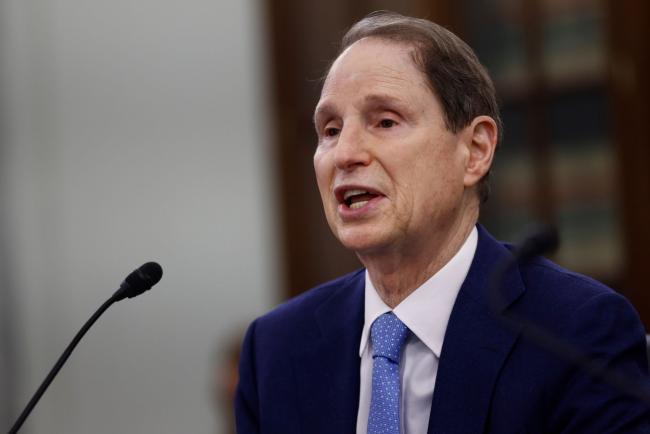 © Bloomberg. Senator Ron Wyden, a Democrat from Oregon, speaks during a Senate Commerce, Science and Transportation Committee hearing in Washington, D.C., U.S., on Wednesday, March 23, 2022. The hearing is titled

(Bloomberg) -- Oil companies that record a profit margin better than 10% would face a new federal surtax under a plan developed by a key senator, as Democrats and the White House struggle to curb US energy costs and broader inflation.

The proposal by Senator Ron Wyden, an Oregon Democrat who chairs the tax-writing Finance Committee, would mean oil companies face federal taxes of as much as 42% on profits considered excessive -- the 21% US corporate tax plus a new 21% surtax, according to two people briefed on the proposal.

Wyden has yet to release his plan publicly, and he’d likely need all 50 Senate Democrats to support it in order to pass the surtax over Republican opposition. He’s among several Democratic lawmakers, including Senator Sheldon Whitehouse and Representative Peter DeFazio, who have discussed targeting what they consider excessive oil company profits.

The idea has caught the attention of top Biden aides in recent weeks, as they search for any and all ideas to tackle rising energy costs.

“We’re not ruling that out of consideration. We’ve made that clear,” Bharat Ramamurti, deputy director of the National Economic Council, told Bloomberg TV’s “Balance of Power with David Westin.”

Biden, Ramamurti added, has made clear that “there’s a real issue here with the level of production by the oil companies and the profits that they are making right now after the Russian invasion of Ukraine.”

At a port in Los Angeles on Friday, President Joe Biden echoed that sentiment and specifically called out Exxon (NYSE:XOM). “We’re going to make sure everyone knows Exxon’s profits. Exxon made more money than God last year,” Biden said.

Taxing excessive oil company profits is one of many policy ideas under consideration in the White House, two administration officials said. Yet internally, aides remain concerned such a tax could hurt ongoing efforts to boost the supply of oil.

If combined with a gasoline rebate, a windfall profits tax would both deter supply and encourage fuel demand, said Kevin Book, managing director of research firm ClearView Energy Partners LLC. “It is the opposite of balancing the market.”

An idea out of Treasury to place a cap on the price of Russian oil, alongside European allies, has gained far more traction inside the administration.

Wyden’s plan would also impose a 25% stock buyback tax for oil and gas companies that repurchase their own shares, Wyden spokeswoman Ashley Schapitl confirmed. Both levies apply to oil and gas companies with at least $1 billion in revenue and would expire at the end of 2025, according to the people briefed on the plan.

Wyden also proposes to eliminate an accounting benefit, known as last-in first-out, or LIFO, that can deliver tax breaks for oil and gas companies with at least $1 billion in revenue starting in 2023.

Wyden’s plan is a more targeted version of a windfall-profits tax that progressives have floated.

Whitehouse, a Rhode Island Democrat, has proposed a 50% tax on the increased barrel price of oil, while rebating that new revenue to low-and-middle-income households. Senator Bernie Sanders, a Vermont independent, has proposed taxing corporate profits that exceed their pre-pandemic levels by as much as 95%, a measure that would mean large companies could owe tens of billions of dollars in additional taxes.

Even Wyden’s narrower measure faces an uphill battle to become law. Republicans are almost certain to uniformly oppose it, while some Democrats, such as Senator Joe Manchin of West Virginia, have expressed skepticism of proposals to hike taxes on fossil-fuel producers.