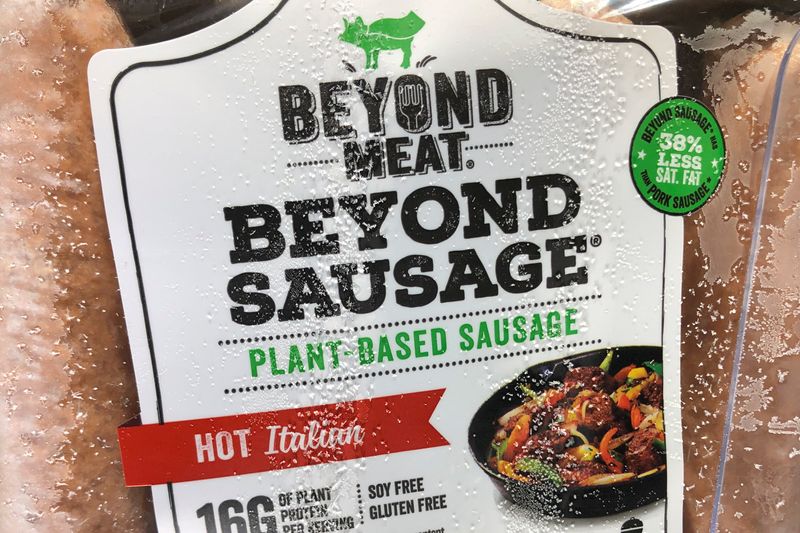 © Reuters. FILE PHOTO: Products from Beyond Meat Inc, the vegan burger maker, are shown for sale at a market in Encinitas, California, U.S., June 5, 2019. REUTERS//File Photo

(Reuters) -Beyond Meat Inc lowered its forecast for 2022 revenue on Thursday and said it would cut several jobs at a time when demand for its plant-based products is fizzling out in the United States.

Analysts have said alternative meat makers should improve their products' taste to attract consumers as a few restaurants including McDonald's Corp (NYSE:MCD) have ended U.S. tests of their plant-based menu items without confirming a broader launch.

"We recognize progress is taking longer than we expected," Beyond Meat (NASDAQ:BYND) Chief Executive Officer Ethan Brown said in a statement. He also said consumers "traded down among proteins" at a time when inflation squeezes spending power.

Brown also said Beyond Meat would aim to cut costs, including in manufacturing, as net loss for the second quarter ended July 2 widened to $97.1 million, or $1.53 per share, from $19.7 million, or 31 cents, a year earlier.

The loss also came in bigger than expectations of $1.18 as it spent heavily to launch its plant-based jerky.

Net revenue was $147 million for the second quarter, compared with $149.4 million a year earlier. Analysts polled by Refinitiv on average had expected $149.2 million.

Beyond Meat also said it would cut roughly 4% of its global workforce to record nearly $8 million in annualized savings.