Bank of England hikes rates by 50 bps as economy slows 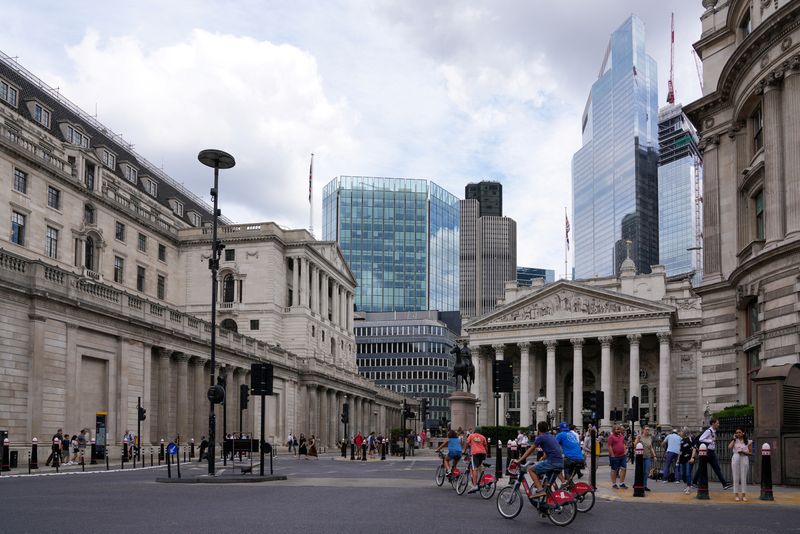 LONDON (Reuters) - The Bank of England raised its key interest rate to 2.25% from 1.75% on Thursday and said it would continue to "respond forcefully, as necessary" to inflation, despite the economy entering recession.

The BoE move follows the U.S. Federal Reserve's decision on Wednesday to raise its key rate by three quarters of a percentage point. The Swiss National Bank earlier on Thursday also hiked rates by 75 bps.

FOREX: The pound slid by more than half a cent against the U.S. dollar GBP= after the decision and dipped below $1.13, after hitting a new 37-year low close to $1.12 earlier in the day.

BONDS: British government bond prices fell sharply, pushing yields up. Ten-year gilt yields were last up 9 bps on the day at 3.40%, their highest since 2011.

STOCKS: UK bank stocks fell before recovering some ground. They were last flat on the day, while the blue-chip FTSE stock index was last down just 0.4% on the day.

"I think the decision makes sense because of what we're likely to see announced tomorrow in the mini budget. Effectively, the Truss government is expected to slash inflation expectations with their policy announcement tomorrow.

"The vote split is phenomenal. You have nine people and there's three different outcomes. Five favoured 50 basis points, 3 argued for 75 basis points and one argued for 25. This sums up the UK economic outlook essentially. The right monetary policy is really, really tricky.

"For sterling, I'm of the view that what we get announced tomorrow will be more upbeat from a growth perspective and lower inflation expectations in the short term. It might allow the BoE to go more steady and could actually be a good backdrop for sterling."

"With financial markets at the margin expecting a hike of 0.75%, the decision to do 0.50% but to begin quantitative tightening in October feels somewhat more of a balanced outcome for financial markets.

"However, given the backdrop of fiscal tailwinds, strong employment data and inflation yet to fall, I would expect both Gilt yields and sterling to remain somewhat unloved for the foreseeable."

"The balance of votes suggests probably the risks are towards at least maintaining this path for a bit, the outlook is uncertain given members have such a dispersion of views.

"It’s interesting that the Bank of England warns for the potential inflation risks of Trussenomics, that probably points to a rates ‘higher for longer’ scenario."

"The doves at the BoE have won out for now, moving rates up by just 50 basis points. But with the inflation forecast actually cut back slightly, perhaps there is ground for the BoE’s hawkishness to drop back a touch.

"Once again, the BoE’s caution has hit sterling, which has dropped again following the decision. Perhaps tomorrow’s government statement will give sterling traders something more positive to think about."

"The Bank of England has raised interest rates by 50 basis points, this was fully priced in by markets, and is a contrast to the 75-basis point increase announced by the Federal Reserve yesterday.

"To the BOE, the government’s energy support package reduces the immediate need to deliver an outsized rate increase by ensuring a lower peak and path of inflation for next year.

"The fiscal stimulus, however, risks higher inflationary pressure in the medium term, so it will not change the BOE’s stance to continue raising interest rates and keeping financial conditions in restrictive territory for the foreseeable future.

"Sterling may experience further weakness as the BOE refuses to join other major central banks to make bolder moves in raising rates as markets focus on the worsening UK fiscal position."

"Markets were expecting a larger 0.75% increase, following the same increase yesterday by the Federal Reserve, which pushed sterling to its weakest against the dollar since 1985. The Bank of England continues to be on the back-foot and playing catch up with the Fed, and at 2.25% UK rates lag the 3-3.25% range in the States.

"The BoE also missed an earlier window of opportunity to, at the very least, dampen the impact on sterling. Instead, the Bank is now in a quandary of how to set policy rates with fiscal uncertainty and a ratcheting up of government borrowing. The Reaganesque policies being pitched by the new cabinet may boost growth, but in our opinion will add to core inflationary pressures in the medium term.

"This comes at a time when the net supply of gilts to the market is being exacerbated by accelerating quantitative tightening. In the near-term, however, money trends suggest the inflationary pulse is in the rear-view mirror. Coupled with the hit to business confidence and consumer spending power this year, we expect the bank will be hiking into a rapidly deteriorating, but not disastrous, environment."

"The announcements made by the government this week will actually mean we get a lower peak in inflation than would have otherwise been the case.

"So, if the Bank of England is taking that into account then it is a slightly bullish that they didn't do 75, only did 50."

"As expected, the Monetary Policy Committee (MPC) raised Bank Rate to 2.25% at its meeting today. Given GDP data for July was underwhelming, retail sales growth is now falling, and consumer confidence is at historic lows, this shows households are already reducing spending to deal with the cost-of-living increases.

"Although inflation will continue to rise over the next month due to the small increase in the energy price cap in October, the peak will be significantly lower than envisaged by the MPC at its previous meeting."

"I think it (the split on the decision) highlights a committee that is unclear about the path ahead. It looks from the first scan of the summary that the committee placed quite a lot of weight on some of the weaker economic data we had recently.

"But the UK economy needs a period of economic weakness to get inflation under control.

"I’m quite surprised that the bank didn't take this opportunity to go 75 basis points, particularly given the cover from some of the other global central banks. The pound looks particularly vulnerable here if the bank stays behind the curve.

"The UK economy has one of the most difficult mixes of growth and inflation in the G7. Until (investors) get more comfort that this mix of fiscal and monetary is the right medium-term one, I’d expect the pound to keep falling against the dollar and the euro."