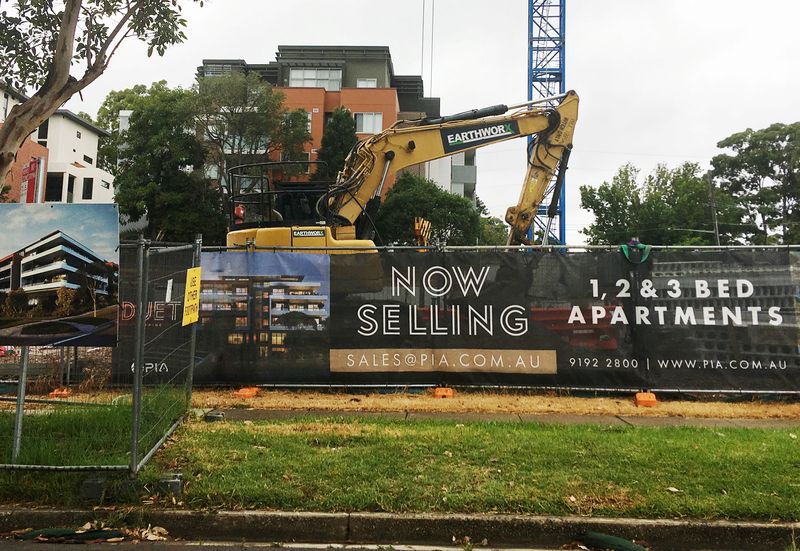 © Reuters. FILE PHOTO: An excavator is parked at the construction site of an apartment block in the suburb of Epping, Sydney, Australia February 1, 2019. Picture taken February 1, 2019. REUTERS/Tom Westbrook/File Photo

Australia's central bank expects to raise interest rates further over the period ahead but stuck with a smaller hike this month partly due to concerns of falling housing prices hurting consumer spending and the value of acting consistently.

Minutes of the Nov. 1 policy meeting out on Tuesday showed the Reserve Bank of Australia's (RBA) Board again considered hiking either by 25 basis points or 50 bps to return inflation to its 2-3% target range, but the arguments for a smaller hike prevailed.

The RBA Board noted rates had already risen by 275 basis points since May to a nine-year high of 2.85% and much of that had yet to feed through into mortgage payments.

While consumption had held up so far, the tightening has hit housing prices, which according to previous experience would likely have a large effect in consumer spending, according to the bank.

Other arguments for a smaller hike include still soft wage growth, some easing in global supply chain issues, a decline in commodity prices and the impact from synchronised global tightening reducing inflationary pressures over the period ahead.

"The Board agreed that acting consistently would support confidence in the montary policy framework among financial market participants and the community more broadly," the minutes showed.

However, the Board, determined to return inflation to its target, did not rule out a return to larger increases if the situation warranted, and conversely, it is prepared to keep rates unchanged for a period while accessing the state of the economy if needed.

"Interest rates are not on a pre-set path," the minutes showed.

The central bank is mindful that a risk to inflation outlook was the possibility that price- and wage-setting behaviour would shift, with wage growth likely picking up further as unemployment rates hovered around the lowest level in nearly 50 years.

Australia will report its wage growth figures for the third quarter on Wednesday, with analysts expecting wages likely rose by 3% from a year ago, up from 2.6% in the previous quarter, due to an increase in minimum wage.

Markets are learning towards a further quarter-point hike at the next policy meeting on December, but imply an around 25% chance the RBA might hold steady. Rates are seen peaking around 3.7% by July next year.

The Board also expects to increase interest rates further over the period ahead in its effort to establish a more sustainable balance of demand and supply in the Australian economy.

RBA Deputy Governor Michele Bullock said on Thursday it might be getting nearer to the point when it might be able to "sit and wait" on raising interest rates, but more evidence was needed that demand was slowing as desired.