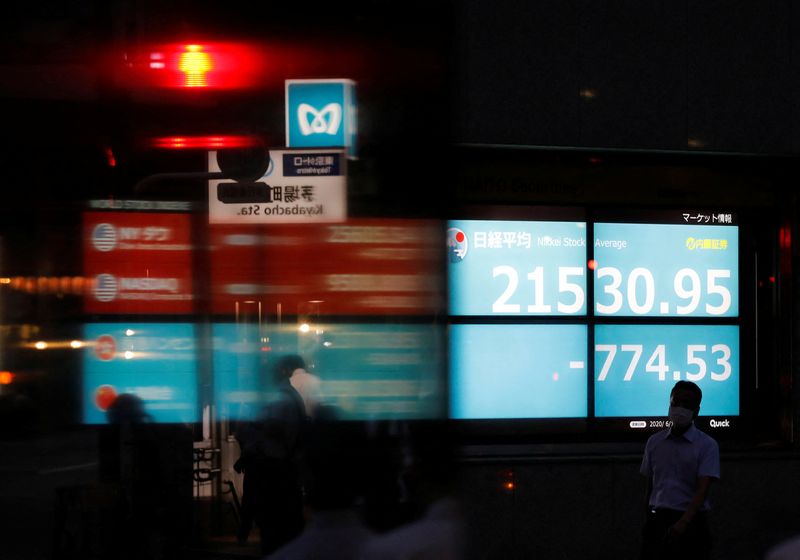 © Reuters. FILE PHOTO: A man wearing a protective face mask, following the coronavirus disease (COVID-19) outbreak, is silhouetted in front of a stock quotation board outside a brokerage in Tokyo, Japan, June 15, 2020. REUTERS/Kim Kyung-Hoon

By Divya Chowdhury and Aaron Saldanha

MUMBAI (Reuters) - Bond markets in Asia are likely to stay resilient even as the U.S. Federal Reserve begins to unwind stimulus and hike interest rates this year, economists said.

Asian bond markets are likely to be more resilient in terms of risk appetite, and there is less upside risk for rates, "despite the situation in China," Tipp told the Reuters Global Markets Forum (GMF).

Staying "more constructive than the consensus" on Asia's

"U.S. real rates have not risen by a significant extent and Asia's starting point of macro stability means that Asia will

be able to manage the Fed tightening cycle," they wrote.

Japan is widely expected to maintain its ultra-loose policy, China's further easing is likely to take yields lower, while South Korean yields, which have already fallen sharply, will see the Bank of Korea tightening beyond Friday's expected hike.

"Asia isn't going to go crazy on rates locally, so may not be too affected by U.S. rates," said Robert Carnell, chief economist and head of research at ING Asia.

"In contrast, Australian bonds (are) likely to more closely track those of the U.S., and we may see the Reserve Bank of Australia hinting about their own end of taper and eventual roll-off," Carnell said.

The U.S. yield curve has flattened following the Fed minutes last week, as investors brace for rate hikes as soon as March that will push short-term rates higher.

Brian Coulton, chief economist at Fitch Ratings, wrote in a note that a full normalisation could see U.S. nominal interest rates rise to about 3% over the medium-to-long term, potentially pushing up global rates.