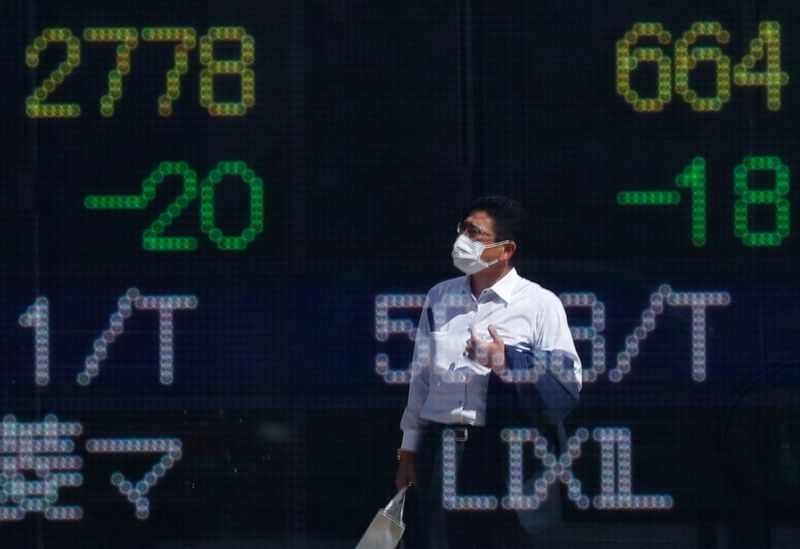 © Reuters. FILE PHOTO: A man wearing a protective mask is reflected on an electronic board displaying stock prices outside a brokerage in Tokyo, Japan, September 29, 2021. REUTERS/Issei Kato

SYDNEY (Reuters) - Asian share markets rallied on Monday on hopes a key reading on U.S. inflation will show some cooling, while the U.S. dollar was restrained by the risk of higher European interest rates and Japanese intervention.

Holidays in China and South Korea made for slow trading, while traders were unsure what implications Ukraine's surprising success against Russian forces might have.

Chinese blue chips firmed 1.3% ahead of retail and industry data due later in the week that may show some improvement in August after a disappointing July.

Bulls are hoping Tuesday's reading on U.S. consumer prices will hint at a peak for inflation as falling petrol prices are seen pulling down the headline index by 0.1%, according to a Reuters poll.

The core is forecast to rise 0.3%, though some analysts see a chance of a softer report.

"Arguably, with the economy having contracted through the first half, and household discretionary spending capacity under significant pressure, we are due a modest downside surprise," said economists at Westpac.

"As such, we forecast +0.2% for core and -0.2% for headline," they added. "If achieved though, it should not be assumed that October and beyond will see repeats, with volatility likely to persist."

A soft number might revive speculation the Federal Reserve will only hike by 50 basis points this month, though it would likely have to be very weak to have a real impact given how stridently hawkish policymakers have been recently.

The market currently implies an 88% chance the Fed will hike by 75 basis points.

BofA global economist Ethan Harris fears that by focusing on actual inflation to determine when to stop, central banks may go too far. The bank has lifted its target for the federal funds rate to a range of 4.0-4.25%, with a 75bp hike in September and smaller rises thereafter.

"For investors, this means more pressure on interest rates, more weakness in risk assets and further upside for the super-strong dollar," said Harris.

"In our view, these trends only turn when markets price the full fury of central bank hikes and we are not quite there yet."

DOLLAR NOT DONE YET

For now, the dollar has run into some profit taking from a market that is very long the currency after a month of sustained gains.

So rapidly has the dollar risen on the yen that Japanese authorities are becoming increasingly vocal in protesting their currency's decline, sparking speculation of intervention and putting pressure on the Bank of Japan to moderate its policy of yield curve control.

Japan's government must take steps as needed to counter excessive declines in the yen, a senior government official said on Sunday, after it hit its weakest level against the dollar in 24 years.

It was helped in part by a Reuters report that European Central Bank policymakers see a growing risk that they will have to raise their key interest rate to 2% or more to curb record-high inflation despite a likely recession.

"The rampant USD is causing strain in developing countries, which are finding imports priced in USD more expensive," they said in a note.

"With Fed speakers using every opportunity to hammer home a hawkish message and quantitative tightening looming, the USD is not about to dramatically turn."

The ascent of the dollar combined with high bond yields has been a drag for gold, which was hovering at $1,714 an ounce after hitting a low of $1,690 last week. [GOL/]

Oil prices have also been trending lower amid concerns about a global economic slowdown, though cuts to supply did prompt a 4% bounce on Friday. [O/R]