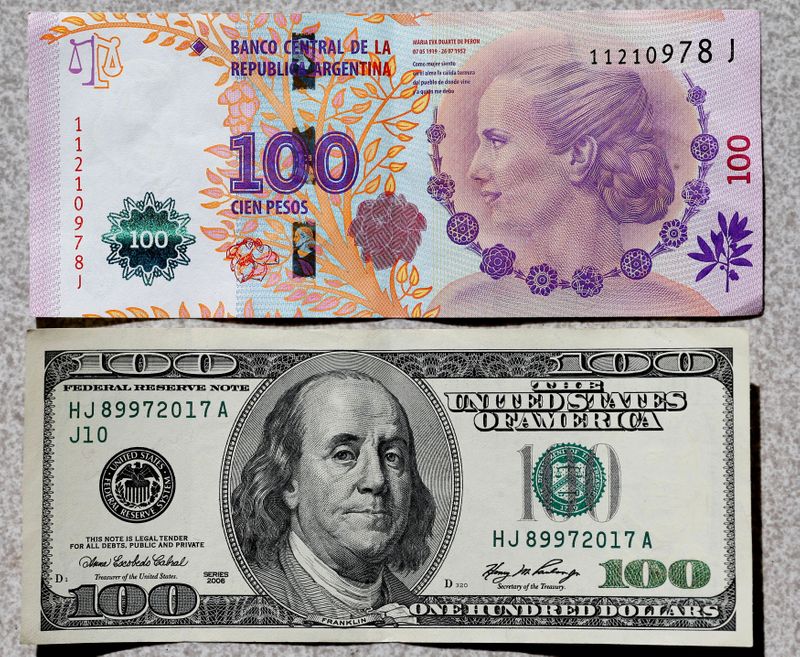 BUENOS AIRES (Reuters) - Argentina's central bank will use its "full force" to rationalize runaway demand for dollars and tame the country's volatile parallel foreign exchange markets, which have heated up due to tough capital controls, a bank source told Reuters on Monday.

Earlier this month the bank tightened rules on companies accessing dollars in alternative foreign exchange markets, part of a bid to limit parallel trades where individuals and firms pay a steep premium for hard currency.

The bank source, declining to be named, told Reuters the bank would wait and see how effective the measures it had taken were before deciding if more restrictions were needed. Dollars trade for around 170 pesos on popular parallel markets, versus the official rate of around 96 pesos.

"We are using our full force to rationalize the demand for dollars," the person said. "We will continue on this track."

Many companies and individuals in the South American nation access dollars via legal, though unofficial, as well as illicit black market routes that often involve processes of buying and then selling financial assets in Argentina and abroad.

Argentina imposed tough capital controls in 2019 that have been hardened in a bid to stem an outflow of dollars from the country, which is locked in talks to revamp some $45 billion it owes the International Monetary Fund.

The central bank has also been rebuilding depleted foreign reserves and purchased over $7 billion so far in 2021, official data show, though is set for a more complex second half of the year with seasonally lower farm exports, the person said.

"The third quarter will be a more complex period for reserves," the person added, adding that the bank was prepared if needed to sell dollars up until the end of the year, though there could be a "positive surprise" given high global prices for commodities and helpful weather spurring grains harvests.

The person added, however, that cold winter weather and dryness impacting waterway levels was increasing the need for more imports of combustibles, which would likely create an energy deficit after a balance last year.

A spokesperson for the central bank declined to comment.

Argentina has been battling swirling economic and debt crises for years. Inflation is running at an annualized rate just over 50%, the benchmark interest rate is 38% and poverty levels jumped to 42% at the end of last year.

The grains-producing country, in recession since 2018, also saw growth hammered even further by the coronavirus pandemic last year, though it has shown signs of recovery this year.

The center-left Peronist government is locked in debt talks with the IMF, with recent progress in negotiations and hopes of sealing a deal later this year or early in 2022.

Tough capital controls, first imposed after a market crash in 2019 by the previous government, have helped keep the official peso rate in check, though analysts have said the controls create pent-up inflation that will need to be released.

The central bank source said a recent deceleration trend in the devaluation of the peso would continue but did not foresee a sharp devaluation later this year, which some analysts have anticipated ahead of mid-term elections in November.

Inflation, while still sky-high, has been cooling on a monthly basis to a 2021-low 3.2% in June. The government and central bank see this decline continuing in the second half the year, which could avert the need for an interest rate hike.

The central bank source said at current monthly inflation levels, a rate hike was unlikely unless prices rose strongly again in the second half of the year. Other regional countries like Chile and Brazil have made recent interest rate hikes.

The person added that there was a longer-term shift to move away from the benchmark interest rate set by central bank-issued Leliq short-term notes to Treasury debt on the open market, though it was on ongoing process to build market confidence.