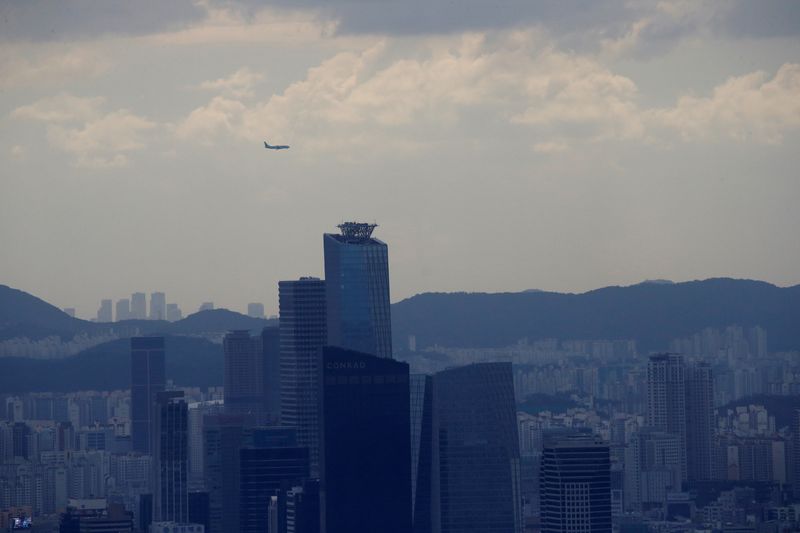 SEOUL (Reuters) - South Korea's property market has abruptly gone from sizzling hot to floundering, piling pressure on some of the world's most debt-saddled consumers as the sector experiences the fastest interest rate hikes on record.

Prices of Seoul apartments last week reported their sharpest decline in 26 months, while transaction volumes in the capital dropped 73% in June from a year earlier.

The 2.6 quadrillion won ($1.97 trillion) debt tied to the property market faces a major test as borrowing costs rise, with a slump and higher mortgage repayments likely to result in weaker consumption.

Ordinary Koreans are already feeling the squeeze - for Jane Jeon, a 36-year-old mother of a six-month old in central Seoul, growing mortgage stress means she has had to make some hard choices.

"My husband's pay now isn't enough to cover our monthly repayment so I need to cut my maternity leave short and return to work," said Jeon, who had initially planned to take 15 months off.

Her family now pays 720,000 won more each month than last year for their 500 million won mortgage, which her broker said will probably rise further by year-end, bringing their total monthly repayment to almost 4 million won, or 70% of her husband's pay.

Financial regulators expect the number of people that could default on their loans to rise by half a million to 1.9 million once the average mortgage rate reaches 7% from current 5-6%.

With services and commodities consumption from construction investment accounting for about 15% of economic activity, a property slump, combined with dwindling exports, would pose a big drag on growth.

"South Korea's financial system is one of the most vulnerable in the world to interest rate hikes, as the debt increase over the pandemic has been one of the highest," said Seo Young-soo, an analyst at Kiwoom Securities.

"Those that had recently taken out both a mortgage and credit loans on top of that (for investment) face the most trouble."

The Bank of Korea has raised interest rates by 1.75 percentage points since August last year, including an unprecedented 50 basis point hike this month.

The policy rate [KROCRT=ECI] is widely seen peaking by year-end at 2.75% from 2.25% currently, which will squeeze indebted families further as local mortgage rates rise from current nine-year highs.

Over the past five years, Seoul home prices more than doubled in what began as a stimulus-fueled search for homes and turned into a national pastime, even as heavier loan restrictions threw many millennials into financial distress.

South Korea had one of the world's highest household debt-to-GDP ratios at 104.3% in the first quarter, data of 36 major economies from the Institute of International Finance shows.

Regulators have sought to mitigate the impact of any household debt on the wider financial system by offering borrowers a chance to refinance loans at a fixed rate. That relief came just two weeks after the BOK's supersized rate hike this month.

"We will improve the structure of household debt in a swift manner," finance minister Choo Kyung-ho said earlier this week. "When the planned refinance package takes off, the proportion of household debt on variable interest rates should fall by up to 5 percentage points, to under 73% from 78%."

The debt to disposable income ratio reached 206% at the end of last year, meaning household debt is now double what they have for living expenses.

"Our apartment is everything we have so we're going to make it work," said Jeon. "I'd hate to move out of Seoul."