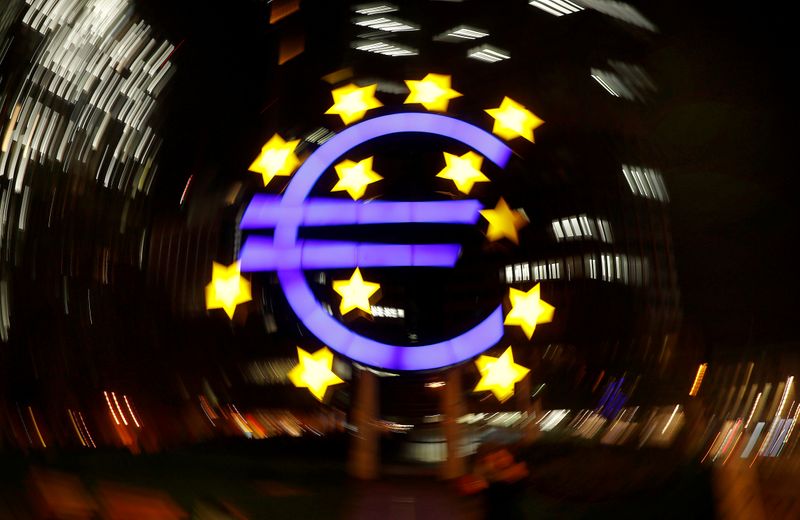 © Reuters. FILE PHOTO: The euro sign is photographed in front of the former head quarter of the European Central Bank in Frankfurt, Germany, April 9, 2019. Picture is taken on slow shutter speed while the camera was moved. REUTERS/Kai Pfaffenbach/File Photo

(Reuters) - European governments' efforts to stamp out outsized bids from hedge funds at bond sales appear to be bearing fruit, with order books for the most recent issues showing a steep decline from levels seen at the start of this year.

Reuters reported in April that huge bids for new bonds officials deemed inflated had become a headache for borrowers such as France, Spain, and the European Union, forcing them to take measures such as capping orders.

That came after a series of bond sales where hedge funds consistently submitted bids far in excess of what they could reasonably hope to receive.

Their aim, bankers say, was to maximize the tiny allocations they receive, in order to "flip" or sell on the bonds for a profit. But for debt offices and bankers sifting through floods of orders, gauging true demand levels and pricing the bonds became increasingly difficult.

France has seen the biggest change, with this month's sale of 30-year debt receiving 28 billion euros in bids, versus 75 billion euros seen at January's 50-year deal.

"I think the accounts are starting to be aware of how we behave," France's debt management office chief Anthony Requin told Reuters.

Requin said hedge funds and some other "relative value players" -- investors who quickly flip the securities -- comprised 80% of the order book for France's 50-year syndication in January, he estimated that the figure for the most recent deal was half that.

Overall, hedge funds now put in orders ranging between 50 and 500 million euros for French syndications, compared to over a billion euros before the measures were taken, Requin added.

Few dispute hedge funds are important to debt sales; they add liquidity, making it easier for the debt to be bought and sold in the market, and bankers say they are still significantly present in the deals.

But problems associated with inflated orders came into stark relief in January and February when many hedge funds pulled out of Spanish and Italian bond deals when the sovereigns cut the yield on offer as the lower yield made flipping the securities less profitable.

In their latest debt sales, books for Spanish and Italian syndications have shrunk to roughly half of early-2021 peaks.

Italy has not changed its allocation policy, but "has intensified" discussions with hedge funds, asking them to submit realistic orders, debt management chief Davide Iacovoni recently said. Spain's Treasury, which has a cap on orders, did not respond to requests for comment.

"We don't have this anymore," one banker involved in recent deals said, referring to mass order cancellations.

The French DMO's Requin said a handful of hedge funds continue to submit very large orders despite the measures, but they have received much smaller allocations on the deals than they would have, even in absolute numbers, had they taken the guidelines into account.

The one entity still seeing huge books is the European Union though it too caps hedge fund orders. Last month's 20 billion-euro debt sale, the first for its pandemic recovery fund, saw over 142 billion euros of orders -- a near-record for a single bond.

Bankers involved with EU debt said its sales still attracts large bids from hedge funds but demand from "real money" investors -- like pension and insurance funds -- has grown sharply too. The amount it is raising per debt sale has also been larger than individual sovereigns.

Spokespeople for the European Commission said it does not openly communicate its allocation policy. It works on the principle that all orders can be fully allocated, they added.