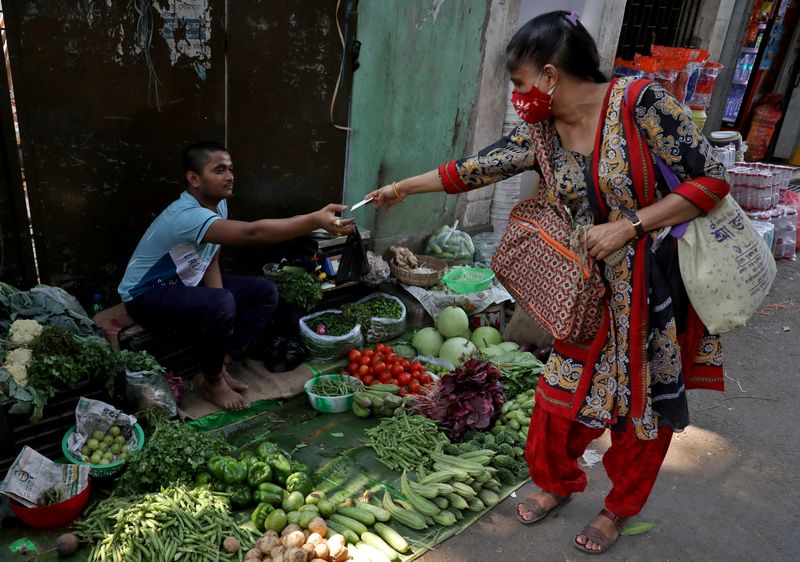 By Swati Bhat and Rajendra Jadhav

MUMBAI (Reuters) - As India faces a crippling surge in food and fuel prices, its policymakers will be counting mostly on this year's monsoon rains, not just interest rate hikes, to take inflationary pressure off the country's households and businesses.

Like its international peers, the Reserve Bank of India is expected raise rates aggressively over the next year to take some of the heat out of prices, but the global drivers of the country's inflation mean there are limits to what domestic monetary policy can achieve, analysts say.

With 75% of India's price acceleration expected to come from food items, the focus for central bankers will be on the success of monsoon rains to boost production and replenish stockpiles, which would ease supply constraints and anchor price expectations.

"Will monetary policy action will be able to contain (food inflation)? Very honestly, it will not," said Indranil Pan, chief economist at Yes Bank. "It will at best contain the second round implications and arrest the inflation expectations from moving on the higher side."

India's retail prices rose 7.04% in May year-on-year, data showed on Monday, slowing slightly from April's eight-year peak but still above the RBI's 2%-to-6% target band for a fifth straight.

Current price increases, if sustained, would pile pressure on the government and more pressingly the central bank, which is politically accountable for extended breaches of the target band.

Food and fuel are the two main sources of inflation in India and prices of most food items have shot up in recent months due to supply disruptions caused by Russia's invasion of Ukraine, erratic weather and export curbs.

India meets two-thirds of its vegetable oil demand through imports. Sunflower oil imports from the Black Sea region have been crippled by the war while palm oil supplies have been hampered by Indonesia's export curbs.

"Until supplies are restored in the world market, prices will not come down to normal levels," said B.V. Mehta, executive director of Solvent Extractors' Association of India.

This puts the burden on domestic production with hopes pinned on a normal monsoon season that could ease food prices in the second half of the fiscal year ending March 2023.

But so far, rainfalls in the season starting June 1 are 36% lower than average.

India's monsoon is crucial for its farm output and economic growth, with just over half of arable land fed by rain.

If this year's monsoon disappoints, analysts believe the government will have limited fiscal space to arrest prices.

The government last month restricted wheat and sugar exports and announced a series of changes to commodity tax structures to insulate consumers.

"If the barometer stays above target for three consecutive quarters, the RBI is obliged to explain to the government".

While a good monsoon would bring some price relief, it is a factor the central bank has no control over.

The world's fifth-largest and second-most populous economy has a troubled history with inflation: price surges have created social and political instability in the past that the Modi government will be keen to avoid.

Authorities were able to keep wheat and rice prices down, defying a global spike, thanks to a pandemic-era foodgrain distribution scheme.

However, with that programme scheduled to end in September - and grain stocks now down nearly 29% from a year ago - wheat prices could surge, a Mumbai-based dealer with a global firm said.

Compounding that problem, the government's wheat purchases from farmers have more than halved this year after heat-waves slashed output.

All of that risks reviving the kind of price pressures that have troubled politicians and bureaucrats in the past.

India's Congress party, which ruled the country most of the time since independence in 1947, lost power in the 2014 general elections mainly due to double digit inflation and corruption charges.

"Indian political history shows that food inflation has an immediate and visceral impact on the political mood and is something the Modi government has to take very seriously."