Analysis-Election risk? No sweat for bond investors in Italy, France 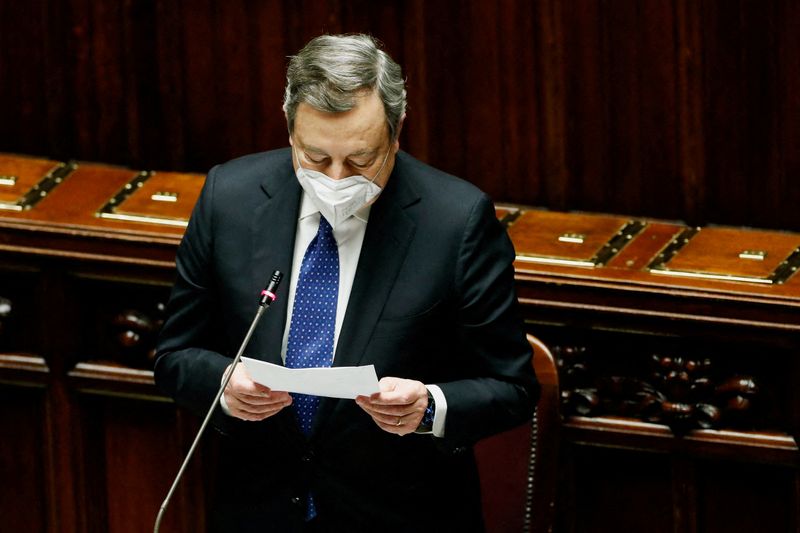 By Stefano Rebaudo and Yoruk Bahceli

MILAN (Reuters) - Bond market calm in the face of a possible government shake-up in Italy and French elections in April offers proof, if any were needed, that Europe's display of solidarity during the pandemic has all but wiped out euro break-up risks.

The run-up to these events is very different from 2017 and 2018, when the prospect of a far-right, eurosceptic French presidency and Italian politicians' clashes with Brussels respectively set euro zone break-up gauges aflame.

Fears of 'Frexit' and 'Quitaly' - the risk that these countries would ditch the single currency, causing the bloc's break-up - also ran strong in the wake of Britain's shock 2016 Brexit referendum.

But this April's French presidential election isn't much on the radar, despite the possibility of a far-right candidate making it to the second round.

Markets also are mostly unruffled by Italy's presidential election kicking off on Jan. 24, which could see Prime Minister Mario Draghi become president and possibly trigger snap elections that could result in a potentially fractious coalition.

Reduced fears of a euro zone break-up this time round reflect a shift in rhetoric after the pandemic highlighted the benefits of membership of the bloc for more indebted states.

"Anti-euro rhetoric is no longer so much in fashion after the pandemic and the NGEU," said Mauro Valle, portfolio manager at Generali (MI:GASI) Investments Partners, referring to the European Union's Recovery Fund created in 2020 to disburse up to 800 billion euros ($917.44 billion) to member states.

As the presidential vote in Italy approaches, Italian yield spreads above regional benchmark Germany - the premium investors demand for exposure to Italy, the euro zone's second most indebted economy - has widened to around 140 basis points, up 10 bps since the end of November.

But that's less than half where it was in October 2018.

"On a scale of one to 10 where 10 is maximum panic, I think we may still be around 1 or 2," said UBS strategist Rohan Khanna.

"As far as Italy is concerned ... questions on how to hedge this (political) risk have just started," Khanna said.

Khanna said he fielded some client questions last year on French risks but these had since abated, possibly as far-right campaigns lose steam.

While Italian and French yields have risen since the start of December and Italian spreads over Germany have widened, it's part of a broad-based rise driven by higher borrowing costs worldwide and the impending slowdown in European Central Bank bond purchases.

So while in 2017 and 2018, the French-German and Italian-German spreads surged some 50 bps and 180 bps respectively, most investors canvassed by Reuters expect no more than 20-25 bps of Italian spread widening during the vote on a new president and its aftermath.

French spreads are expected to move modestly too and a Deutsche Bank (DE:DBKGn) survey in December found only 1% of respondents expect the election to be a major event for financial markets.

And there is no sign of any safety bid causing a dash for German bonds, where yields have risen in line with elsewhere.

Any election carries risks, and for Mike Riddell at Allianz (DE:ALVG) Global Investors they are a reason to short Italian and French bonds "not because we think there will be a massive upset, it's just that there's such little risk of it being priced in".

Polls themselves may be providing investors with some relief, with the latest in France showing either of the two far-right candidates may not make it to the second round, meaning conservative Valerie Pecresse may face incumbent Emmanuel Macron instead.

But the biggest change this time around is that far-right politicians overall have toned down the euroscepticism, notes Generali Investments Partners's Valle, who is 'overweight' Italian bonds and sees any selloff as a chance to increase allocations.

The creation of the European Union's Recovery Fund in particular is considered a turning point for the EU, enabling joint borrowing on a scale unthinkable in previous crises.

Italy, where far-right leader Matteo Salvini assailed bond investors as 'lords of the spread', is the prime beneficiary of the fund and of the EU's decision to suspend debt rules.

It will receive as much as 205 billion euros from the fund via loans and grants, which Khanna of UBS described as a "welcome present" to any incoming Italian leader and a powerful incentive to stay on good terms with the bloc.

"They can't walk away from it," he added.