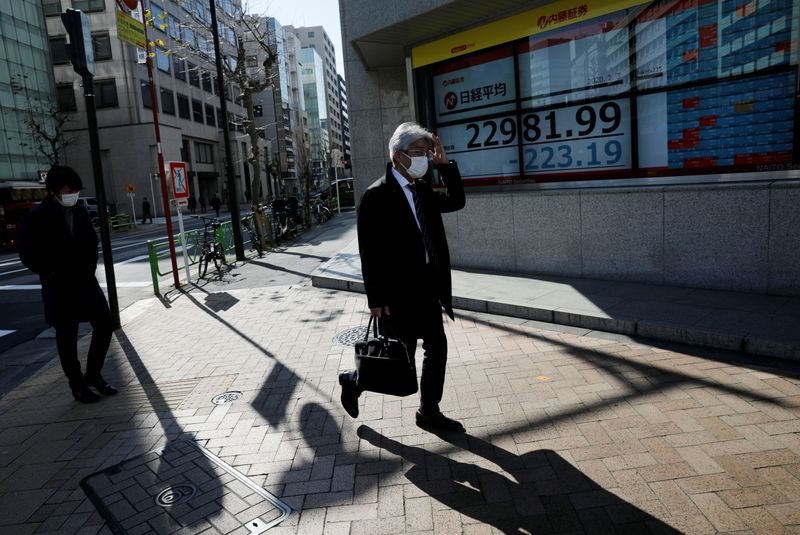 LONDON (Reuters) - Wall Street headed for a lower start on Friday as investors sought to interpret a 'mixed bag' of payrolls numbers before the final session of a rollercoaster first trading week of the year.

U.S. employment rose by a less-than-expected 199,000 jobs last month as the impact of a resurgent pandemic bites, well below the 400,000 forecast by economists, but data for November was revised higher. The unemployment rate dropped to underscore tightening labour market conditions.

S&P 500 e-mini stock futures and Nasdaq futures, which had been firmer ahead of the data, turned weaker, pulling European shares towards their low for the day as investors studied the payrolls data for clues to the pace of anticipated interest Federal Reserve rates hikes.

After a start to 2022 marked by new highs, the mood changed on Wednesday after minutes from the Fed's December meeting signalled the central bank may have to raise interest rates sooner than expected.

"In terms of any effects on monetary policy, it's going to be minimal at best right now because the path for monetary policy right now is pretty clear cut," said Art Hogan, chief market strategist at National Securities in New York.

"The takeaway is probably this gives the Fed cover to move in March, which was the earliest end of expectations prior to the report," added Thomas Hayes, chairman and managing member of Great Hill Capital.

Oil was heading for its best weekly gains since mid-December, fuelled by supply worries as unrest worsened in Kazakhstan, where an Internet shutdown hitting the global computing power of the bitcoin network helped to send the cryptocurrency to its lowest level since September.

Euro zone inflation rose unexpectedly last month to 5% from 4.9% in November, a record high for the currency bloc, though unlike the Fed, the European Central Bank says prices will ease enough this year to avoid the need for rate hikes.

The dollar was set to notch broad weekly gains, hitting a five-year peak on the yen at 116.35 on Tuesday, hovering around 115.84 on Friday.

Oil prices rallied, which some analysts linked to news that Russian paratroopers had arrived to quell unrest in Kazakhstan, though production in the OPEC+ producer country remains largely unaffected so far.

Spot gold stood at $1,790 an ounce, slightly firmer on the day after touching a two-week low of $1,788.25 on Thursday, as rising U.S. Treasury yields hurt demand for the non-interest bearing metal.

Bitcoin dropped 3.7% to around $41,483 after hitting its lowest since late September as the hawkish Fed minutes also sapped appetite for riskier appetites.