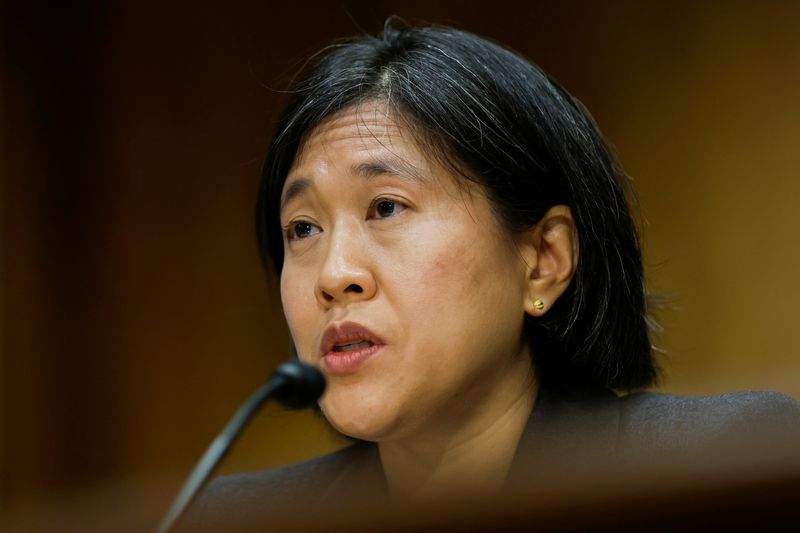 WASHINGTON (Reuters) - All tools are on the table to address rising inflation, including reductions of tariffs on Chinese imports, U.S. Trade Representative Katherine Tai said on Monday, but she stressed that any policy shift needed to keep medium-term goals in mind.

Such goals include building a more resilient, durable, global economy that served workers as well as consumers, she noted.

Monetary, tax and policy policy have a role in addressing surging food and energy prices, Tai told a conference hosted by the Milken Institute in Los Angeles.

"Sure we can look at those tariffs, but I'm giving you the ... strategic lens through which we need to be looking at. The question is what do we do with them."

The Biden administration has come under increasing fire from industry for not canceling tariffs on hundreds of billions of dollars of Chinese imports that were imposed by former President Donald Trump, especially given inflation rates at 40-year highs.

Recent comments by deputy national security adviser Daleep Singh and Treasury Secretary Janet Yellen about the deflationary impact of tariff reductions sparked a flurry of speculation that the administration was thinking about changing course.

But Tai appeared to downplay the prospects of a larger-scale move to reduce tariffs, and challenged a recent paper by the Peterson Institute for International Economics that called for elimination of a wide swath of tariffs to combat inflation.

The paper said U.S. consumer price index inflation would decline by 1.3 percentage points if the United States and China eliminated tariffs, and Washington scrapped tariffs on steel and aluminum from all countries, as well as softwood lumber from Canada.

"I really have to challenge the premise of that study," Tai told the conference. "I think it's either something between fiction or an interesting academic exercise."

Sources familiar with the administration's thinking said no major moves were imminent on tariffs, although Tai's office continued to look at limited exclusions from the tariffs on Chinese goods implemented by Trump.