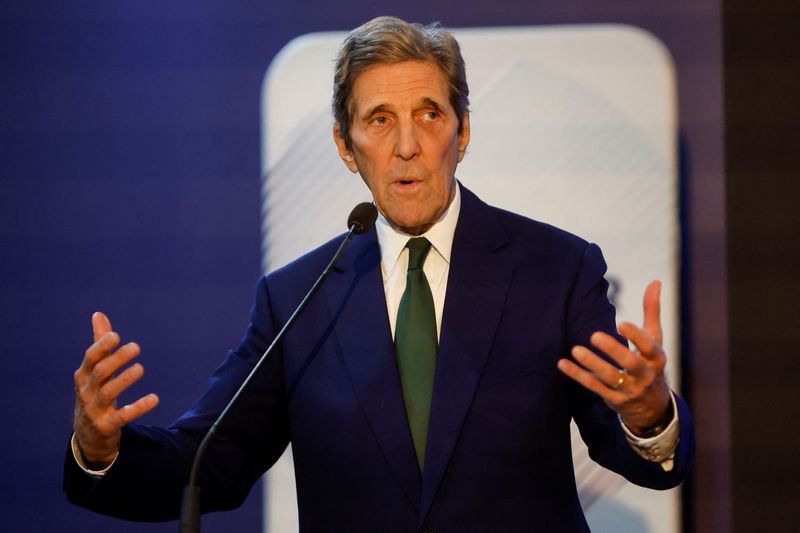 By Valerie Volcovici and Simon Jessop

SHARM EL-SHEIKH, Egypt - (Reuters) - U.S. climate envoy John Kerry said on Tuesday he wants to come up with a plan by April to reform the multilateral development banks system to unleash "hundreds of billions" of dollars to help vulnerable countries combat and adapt to climate change.

Kerry said he wants to work with Germany to come up with a strategy by the next World Bank Group meetings in April 2022 to "enlarge the capacity of the bank" to put more money into circulation and help countries deal with climate change.

"There's no reason why not. We're the largest shareholders, we need to call the meetings, put out the policy and make it happen," he said at a side event at COP27.

He said any new strategy should not require new finance from donor countries or for the banks to accept a lower credit rating.

Kerry said if the World Bank and regional development banks could increase their lending by the hundreds of billions of dollars, it could leverage trillions in capital from the private sector and other sources.

"We've got to get the MDBs to do what the MDBs can do, and they're not today. And we can free more finance by unleashing what is a permissible way of enlarging the capacity of the bank to actually leverage itself and put more money into circulation," he said.

As the delivery of billions of dollars pledged by rich countries to assist countries to adapt to and combat climate change falters, the United States, Germany and other major economies have joined some middle-income countries like Barbados in calling for a “fundamental” overhaul of the World Bank and other international financial institutions.

Kerry's comments come amid growing calls by civil society groups, developing countries and academics, as well as U.S. Treasury Secretary Janet Yellen, for a new "Bretton Woods," a reference to the conference held in 1941 that led to the creation of the International Monetary Fund and the World Bank.

These calls intensified after World Bank President David Malpass in September initially declined to say at a public event whether he accepts the scientific consensus on global warming, which drew condemnation by the White House.

Kerry said he would work with German State Secretary for Economic Cooperation and Development Jochen Flasbarth to develop the plan.

"We just need a leadership that's ready to stand up, do what the laws allow," he said.