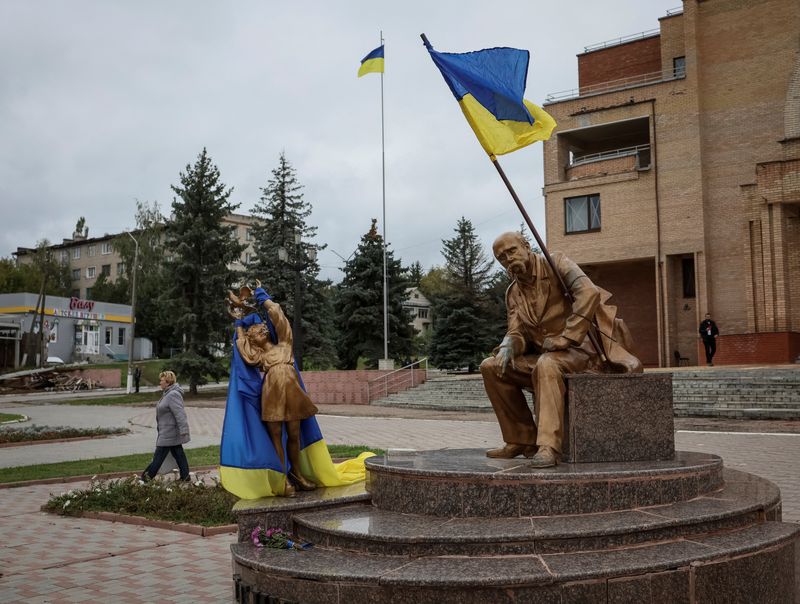 © Reuters. A Ukrainian national flag installed on the monument to Ukrainian poet Taras Shevchenko is seen, as Russia's attack on Ukraine continues, in the town of Balakliia, recently liberated by Ukrainian Armed Forces, in Kharkiv region, Ukraine September 13, 2022.

The group, which includes Canada, France, Germany, Japan, United Kingdom and the United States, said in July that they would provide a coordinated suspension of Kyiv's debt servicing to the end of 2023 and potentially for an additional year.

"This MoU eases Ukraine's liquidity pressures and allows its government to increase social, health and economic spending in response to Russia's unjustified, unprovoked and illegal war of aggression," the group said in a statement issued by France's finance ministry.

The group called on other official bilateral creditors to also quickly reach a debt service suspension deal with Ukraine.

With a monthly fiscal shortfall of $5 billion, Ukraine is heavily reliant on foreign financing from Western allies and multilateral lenders including International Monetary Fund (IMF) and the World Bank.

"As with our budget support to Ukraine totaling $8.5 billion, the debt service deferral is one more way in which the United States stands with Ukraine in its fight against Russia’s brutal war,” U.S. Secretary of Treasury Janet Yellen said in a separate statement.

The Western creditors group said it welcomed reforms Ukraine is implementing to address the consequences of the war and it also welcomed an agreement by bond and warrant holders to defer debt payments for two years.

Ukraine's overseas private creditors backed in August its request for a two-year freeze on payments on almost $20 billion in international bonds, a move that will allow the war-ravaged country to avoid a messy debt default.