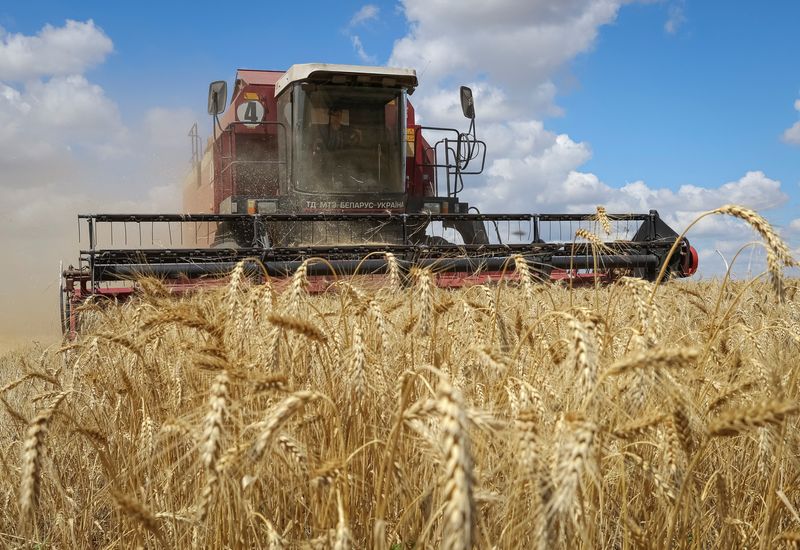 By Pavel Polityuk and Max Hunder

KYIV (Reuters) -Ukraine said on Monday it hoped a U.N.-brokered deal aimed at easing global food shortages by resuming grain exports from the Black Sea region would start being implemented this week.

Senior government officials told a news conference in Kyiv that they hoped the first grain shipment under the deal would be from the port of Chornomorsk this week, and that shipments could be made from all ports included under the deal within two weeks.

Infrastructure Minister Oleksandr Kubrakov said there were no limits on how much grain could be exported under the agreement signed on Friday in Istanbul, which also allows for fertiliser imports and exports.

"We believe that over the next 24 hours we will be ready to work to resume exports from our ports. We are talking about the port of Chornomorsk, it will be the first, then there will be Odesa, then the port of Pivdeny," said deputy infrastructure minister Yuriy Vaskov.

Friday's agreement aims to allow safe passage in and out of Ukrainian ports, blocked by Russia's Black Sea fleet since Moscow's Feb. 24 invasion.

The deal was hailed as a diplomatic breakthrough that would help curb soaring global food prices by restoring Ukrainian grain shipments to pre-war levels of 5 million tonnes a month.

Kubrakov told the news conference that opening up the Black Sea ports for exports would bring Ukraine at least $1 billion a month.

"It is very important that our farmers receive funding this year and have the opportunity to carry out the sowing campaign for the next season, because without this we will lose the entire agricultural cycle and the entire industry," he said.

"It's a question of the survival of our entire agricultural industry"

Ukraine is pressing on with efforts to implement the deal despite a Russian missile strike on Odesa on Saturday. Russia said on Sunday its forces had hit a Ukrainian warship and a weapons store in Odesa with its high-precision missiles.

"We all saw perfectly on Saturday that it is not a problem for them to shell the port infrastructure. This is the main risk (to the deal) and we understand that it can scare the market," Kubrakov said.