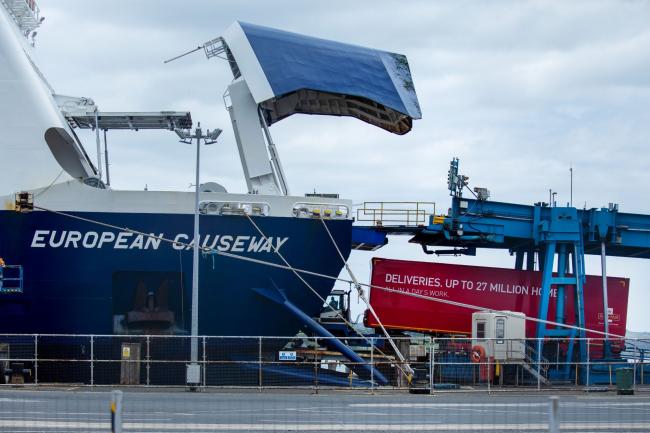 © Bloomberg. A Royal Mail Plc haulage truck trailer being loaded onto a ferry at Larne Port in Larne, Northern Ireland, UK, on Tuesday, July 5, 2022. British Prime Minister Boris Johnson wants Parliament to pass his plan to override the Brexit deal by the end of 2022, but it could take as long as a year to become law if the House of Lords digs in. Photographer: Emily Macinnes/Bloomberg

(Bloomberg) -- The European Union is poised to agree to use the UK’s live database tracking goods moving from Great Britain to Northern Ireland, the first sign of progress in a long-running dispute on post-Brexit trading rules.

An accord was being finalized at a lunch between UK Foreign Secretary James Cleverly and European Commission Vice-President Maros Sefcovic on Monday, according to people familiar with the matter.

The bloc completed testing on the database proposed by the UK last year, and had suggested several areas of improvement, one of the people said. The UK agreed to work on that feedback, the person added.

The development is the first hurdle cleared since talks began again last year after an eight-month stalemate. While it is a technical step, a database deal will raise hopes for a further agreement on trade flows, and may help to reduce customs checks between Northern Ireland and the rest of the UK.

The UK government did not immediately respond to a request for comment.