Turkey to end easing next week with one last rate cut to 9%: Reuters poll 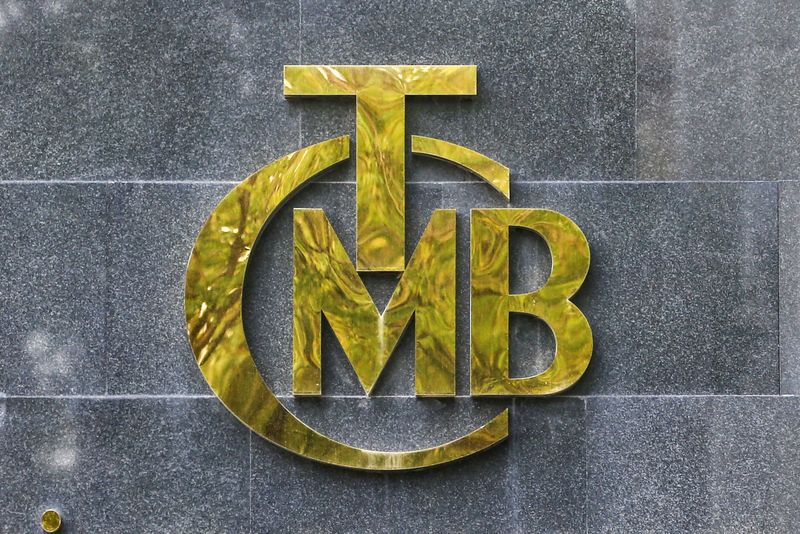 © Reuters. FILE PHOTO: A logo of Turkey's Central Bank is pictured at the entrance of its headquarters in Ankara, Turkey October 15, 2021. REUTERS/Cagla Gurdogan/File Photo

ISTANBUL (Reuters) - Turkey's central bank is expected to cut rates by another 150 basis points next week to 9% and halt the easing thereafter, a Reuters poll showed on Friday, after President Tayyip Erdogan called for the stimulus despite more than 85% inflation.

The predicted cut would bring the cumulative easing in four months to 500 basis points, which the central bank says is necessary given signs of economic slowdown. It is swayed by Erdogan who had called for a single-digit rate by year-end.

The central bank will announce its rate decision at 1100 GMT on Nov. 24.

The bank cut its policy interest rate by an unexpectedly aggressive 150 basis points last month, and said at the time it evaluated a similar move for November before ending the current easing cycle.

All 14 economists that participated in the Reuters poll expected a 150 basis-point cut to 9% in the one-week repo rate.

Of the 15 that gave year-end predictions, only one economist saw another cut in December, bringing the policy rate to 8.0%, while the others saw the bank holding steady after November.

In response to a question about the policy rate at the end of 2023, six of seven economists expected a pivot to tightening that would bring it to a range between 16% and 35%.

One economist noted that policy would depend on whether Erdogan is re-elected in a presidential vote in May or June next year.

Inflation has surged since autumn 2021, stoked by an unorthodox easing cycle of 500 basis points that sparked a currency crisis late last year.

Erdogan, a self-described "enemy" of interest rates, aims to boost investments, production, exports and employment while lowering rates under his economic programme.

The central bank expects inflation to drop to 65.2% by end-2022, thanks largely to a so-called base effect. That compares to a median estimate of 70.25% in the latest Reuters poll and 68.06% in a central bank survey published on Friday.

The bank says it will achieve a permanent fall in inflation once Turkey's chronic current account deficits turn to a surplus under the new economic plan.

Ankara does not see a surplus in its economic projections that cover up to 2025.