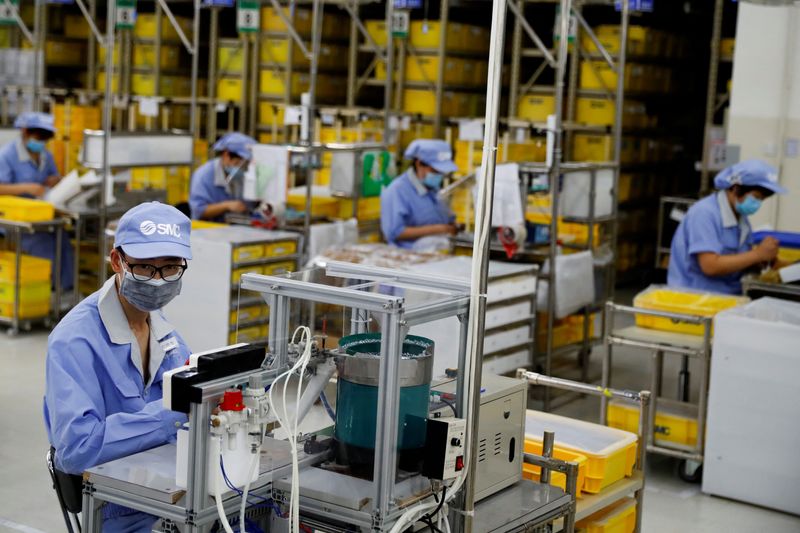 © Reuters. FILE PHOTO: Employees wearing face masks work at a factory of the component maker SMC during a government organised tour of its facility following the outbreak of the coronavirus disease (COVID-19), in Beijing, China May 13, 2020. REUTERS/Thomas Peter

It didn't take long for speedbumps to appear as markets rev up for 2022. Rising U.S. Treasury yields, sparked by growing speculation the Federal Reserve could start its rate hike cycle as early as March have doused early enthusiasm, just as the U.S. earnings season is about to kick off.

And unrest in Kazakhstan has put geopolitical risks back on the agenda, while China battles to keep its zero COVID strategy on track ahead of the Winter Olympics.

Here's your week ahead in markets from Tom Westbrook in Singapore, Lewis Krauskopf in New York and Dhara Ranasinghe , Tom Wilson https:// and Karin Strohecker in London.

Massive profit increases from U.S. companies helped fuel last year's 27% gain in the S&P 500. As the earnings season kicks off in coming days, companies will likely have a difficult time posting similar numbers for the fourth quarter.

Earnings for S&P 500 companies are expected to jump 22.3%, according to Refinitiv IBES -- a robust increase, though a lower clip than in the first, second and third quarters.

Big Wall Street banks JPMorgan (NYSE:JPM), Citigroup (NYSE:C) and Wells Fargo (NYSE:WFC) will be first in line to report. Investors are keen to hear about inflation, whether companies believe the supply chain bottlenecks that helped drive prices up last year will ease in coming months and forecasts for 2022. S&P 500 profit growth is expected to slow to 8.4% from 49.7% in 2021.

The first week of trading in 2022 has been anything but dull for the world's biggest bond markets. Short-dated Treasury yields shot up to highs not seen since early 2020, 10-year yields are up over 20 bps, Germany's -0.06% Bund yield is lurching closer to 0% and sovereign borrowing costs from Britain to Australia are at multi-month highs.

The message is clear: tighter monetary policy is likely sooner than anticipated, with the United States leading the way. Until data or central bank speak contradicts this, 10-year Treasury yields could reach the 2% milestone soon.

Investors will also keep a close on real yields since a view that inflation-adjusted yields will remain low has fueled the risk asset rally . The first week's 30 bps jump in U.S. real yields may not make for a happy new year for some.

For a related graphic on U.S. Treasury yields shoot up at start of 2022, click https://fingfx.thomsonreuters.com/gfx/mkt/xmpjobrbqvr/themejan7.png

For millions in China the new year began as the old ended - under lockdown . COVID-19 cases are few, particularly of the Omicron variant, but restrictions are spreading fast as authorities keep a zero-tolerance policy before next month's Winter Olympics.

Xian is more than two weeks into a lockdown and harsh rules are rolling out across central China. All 400,000 residents of Yongji, in Shanxi Province, were ordered to remain indoors this week after the virus was detected on a railway turnstile.

The measures could render moot any further easing of zooming producer prices in December data due on Wednesday, especially if they trigger fresh supply-chain disruption around the world.

Deadly protests in Kazakhstan - the worst violence in its 30 years of independence - have added to the list of flare ups in the region being felt well beyond its borders.

Once again, Russia plays a key role. The Kremlin deploying troops is widely seen as a gamble to secure its interests in the oil and uranium-producing Central Asian nation.

Reverberations are felt throughout commodity markets and weighed on the rouble as Russia finds itself again in the limelight -- tensions over Ukraine have loomed large over its markets. The outcome of unrest in Kazakhstan is yet unclear, but markets will have to sift through the fallout for geopolitical risk and diplomatic alignments for some time to come.

For a related graphic on Protests in Kazakhstan, click https://graphics.reuters.com/KAZAKHSTAN-PROTESTS/zjvqknwrwvx/chart.png

After a wild 2021, bitcoin's new year hangover has lingered into the first week of 2022 - and might get worse.

The computing power of its network dropped sharply this week as Kazakhstan's internet was shut down during its uprising, hitting its cryptocurrency mining industry - the second biggest in the world.

The drop in bitcoin "hashrate" might, in theory, hit its price. The more miners on the network, the greater the amount of computing power needed to mine new bitcoin. If miners drop off the network, it becomes easier for the remaining miners to produce new coins - in theory boosting supply.

Bitcoin has fallen below $41,000 to its lowest since late September with hawkish signs from the Fed adding to the malaise. Some see it slipping further into the $30,000-range. Crypto investors will be searching for signs bitcoin can get off the ropes.