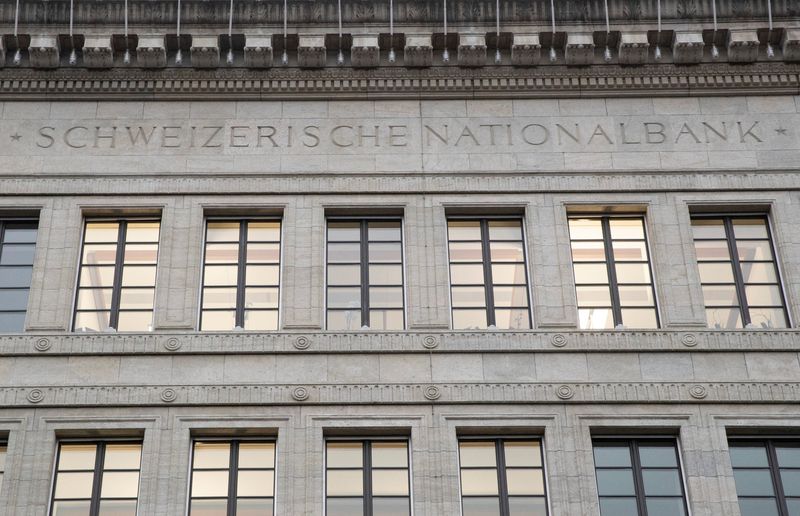 ZURICH (Reuters) -The Swiss National Bank spent 2.79 billion Swiss francs ($3.05 billion) on foreign currencies during the third quarter, data showed on Friday, representing a decrease in its interventions despite the safe haven franc continuing to rise in value.

The figure was less than the 5.44 billion francs spent by the SNB between April and June and also lower than the 10.97 billion francs it spent during the third quarter in 2020, the central bank data showed.

During the three months from July to September the franc appreciated 1.6% versus the euro, and has since been pushed even higher after attracting investors looking for safe haven assets.

Currency interventions, along with negative interest rates, are the cornerstones of the SNB's battle to stem the strengthening of the Swiss franc. The bank recently repeated its commitment to interventions.

A stronger Swiss franc threatens to undo the SNB's goal of achieving price stability in Switzerland by pushing down the price of imports, while it hurts the country's economy by increasing the price of Swiss exports.

But the apparent low level of forex purchases prompted speculation among economists that the SNB had become more reluctant to rein in the franc as it rose in value.

Analysts have also said the SNB seems more comfortable with the franc's recent appreciation because lower Swiss inflation as against inflation in the euro zone reduces the real effect of the currency's nominal appreciation.

"The low level of FX interventions in Q3 indicates that the SNB had few concerns with the exchange rate developments in Q3," said Karsten Junius, an economist at J.Safra Sarasin.

"In Q4, we expect a higher level of FX interventions. In this period the CHF appreciated by 5% vs the euro alone – which is a speed of adjustment that is clearly too fast for the comfort of Swiss exporters and hence also for the SNB."