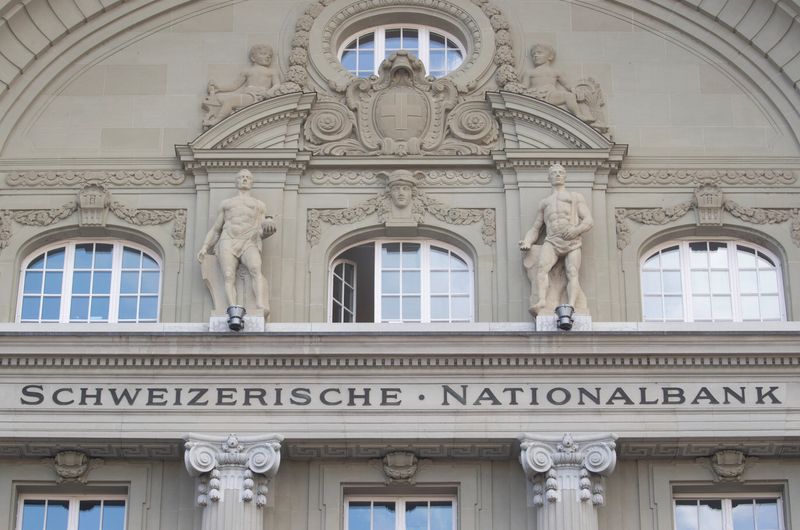 By John Revill and Silke Koltrowitz

BERN (Reuters) -The Swiss National Bank raised its policy interest rate for the first time in 15 years in a surprise move on Thursday and said it was ready to hike further, joining other central banks in tightening monetary policy to fight resurgent inflation.

The central bank increased its policy rate to -0.25% from the -0.75% level it has deployed since 2015, sending the safe-haven franc sharply higher. Nearly all the economists polled by Reuters had expected the SNB to keep rates steady.

It was the first increase by the SNB since September 2007, and followed a 0.75% rate hike by the U.S. Federal Reserve on Wednesday.

Other central banks are also raising interest rates as they attempt to cool inflation driven higher by surging fuel and food prices that are straining budgets for households and businesses.

The Bank of England looks set to raise interest rates again on Thursday as it tries to tackle an inflation rate on course for double digits.

The European Central Bank signalled last week it would raise its rates in July to check euro zone inflation that hit 8.1% last month.

SNB Chairman Thomas Jordan said the inflation situation - with Switzerland seeing its highest price rises in nearly 14 years during May - meant the SNB may have to act again.

"The new inflation forecast shows that further increases in the policy rate may be necessary in the foreseeable future," he told a news conference.

Thursday's rate increase was necessary to check rising prices in Switzerland, which had spread to goods and services not previously affected by the impact of the war in Ukraine and supply chain bottlenecks linked to the pandemic.

"In the current environment, price increases were being passed on more quickly, and are also being more readily accepted, than was the case until recently," Jordan said.

"There is the threat of second-round effects becoming entrenched if inflation remains above 2% for a long period."

He said recent depreciation meant the Swiss franc was no longer highly valued on currency markets - long a concern for the SNB - and that the SNB was ready to intervene in markets to check excessive appreciation or weakening of the franc.

The safe-haven franc's strength had dampened the impact of inflation in Switzerland by reducing price rises for fuel and food imports, but this was less the case following its recent weakening, Jordan said.

"Thus the inflation imported from abroad has increased," he said. "Another consequence of this depreciation coupled with significantly higher inflation abroad is that the franc is no longer highly valued."