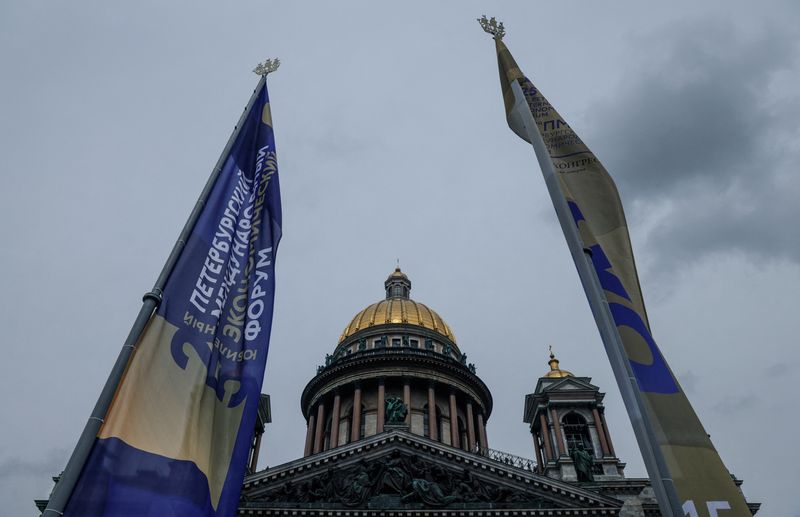 (Reuters) -Russia for years hosted world leaders and business titans at its annual economic forum in St Petersburg, but the "Russian Davos" will see little of the global financial elite this year with Moscow isolated by sanctions over its actions in Ukraine.

This week, to make up for the lack of major Western attendees, Russia is giving pride of place to smaller players or countries like China - the world's second largest economy - that have not joined in sanctions.

"Foreign investors are not only from the United States and European Union," Kremlin spokesperson Dmitry Peskov told reporters on Tuesday, pointing to the Middle East and Asia.

President Vladimir Putin will give a major speech on Friday focusing on the international economic situation and Russia's tasks in the near future, Interfax news agency cited Kremlin aide Yuri Ushakov as saying.

He will also meet media on the sidelines of the forum at about 8 p.m. Moscow time (1600 GMT) that day, he said.

The Kremlin launched the St Petersburg International Economic Forum (SPIEF) in 1997 to attract foreign investment, discuss economic policy and project an image it was open for business after the demise of Soviet rule.

Now, with Western leaders shunning dealings with Russia, Putin will have no traditional meeting with political movers and shakers and corporate bigwigs from the United States and Europe.

There were no names of U.S. and European companies or their CEOs on the published schedule for the June 15-18 SPIEF - reflecting fears of punishment under the most sweeping sanctions regime ever imposed on a major power.

Even companies that have hung on in Russia despite the general exodus of Western investors were not listed.

Ushakov said high-level delegations from more than 40 nations were expected while 1,244 Russian and 265 foreign companies had confirmed they would be there.

In one exception to the absence of Western figures, the head of the American Chamber of Commerce in Russia along with French and Italian counterparts will speak at a session on Thursday called "Western Investors in Russia: New Reality."

Russia's relations with the West have turned toxic since it sent armoured forces into Ukraine on Feb. 24 in what it calls a "special military operation" to remove threats to its security. Ukraine and its Western backers call Russia's actions an unprovoked invasion aimed at grabbing territory.

As foreign companies write down billions of their once promising Russian investments, domestic firms and banks are rushing to take over businesses left behind.

"Sanctions are for the long haul. Globalisation as it used to be has ended," Andrey Kostin, CEO of sanctioned bank VTB, Russia's second-largest, told RBC business daily.

'NEW OPPORTUNITIES IN A NEW WORLD'

In past years, SPIEF'S sessions would focus on investment-oriented topics such as privatisation by Moscow and initial public offerings (IPOs).

Another session - "A new form of international cooperation: how will payments be made?" - touches on Russia's ejection from the global SWIFT payment system and its move to circumvent the ban by demanding payments for gas exports in roubles. It will have speakers from allies Cuba and Venezuela as well as Turkey and Egypt, which have also eschewed sanctions.

There will be a session on "fake news" - a panel attended by state media, the General Prosecutor's Office and the Foreign Ministry as Moscow pursues an information war with the West.

Other countries sending officials to attend or speak there via videolink include China, Belarus, Central African Republic, India, Iran, Nicaragua, Serbia and the United Arab Emirates.

Some participants asked their employers' names not be printed on their personal badges, RBC reported, citing Rosgoncress, the state company organising the forum.