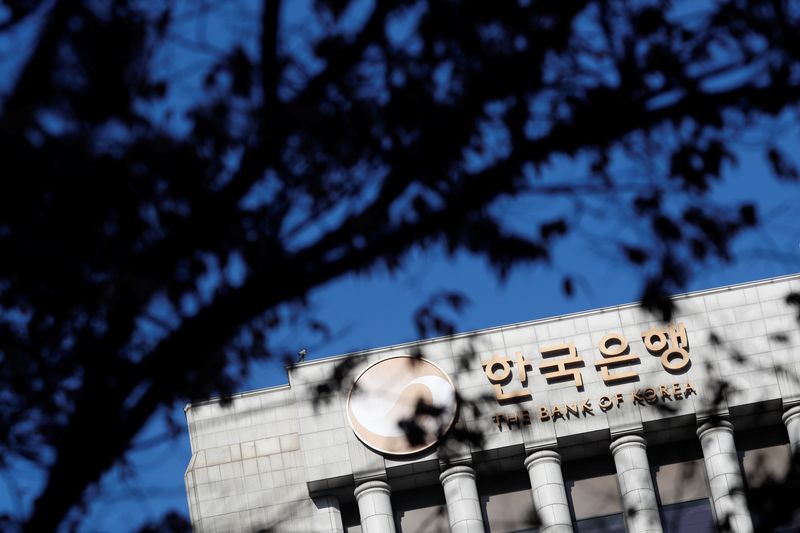 © Reuters. The logo of the Bank of Korea is seen in Seoul, South Korea, November 30, 2017. REUTERS/Kim Hong-Ji

SEOUL (Reuters) - A South Korean central-bank board member affirmed on Wednesday that interest rates should rise further but added that increases should be gradual, since downside risks to both exports and consumer spending had risen.

The central bank "needs to keep its rate-raising stance for the time being, because long-term rates, based on inflation expectations, are estimated to be below the neutral level," Suh Young-kyung, one of the Bank of Korea's six policy-board members, said at a lecture.

Suh gave no estimates for either real (inflation-adjusted) long-term interest rates or the neutral interest rate, at which the central bank would be neither stimulating nor restraining the economy.

The Bank of Korea has lifted its policy interest rate by a total of 1.75 percentage points since August. That has included a bigger-than-usual 0.5 point hike to 2.25% this month, when the governor said more rises were to come.

Suh said the country's annual inflation rate would probably reach its peak during the current quarter then ease gradually. At some point, annual inflation would exceed 6% and it would certainly stay above 3% next year, she added.

Consumer prices in June were 6.0% higher than a year earlier.

Downside risks to both exports and consumer spending had increased, Suh said, citing such factors as the effects of past interest rate rises on asset prices and disposable income.

A prepared text of her remarks was given to reporters before she spoke.