Russian rouble firms towards 62 vs euro, stocks down 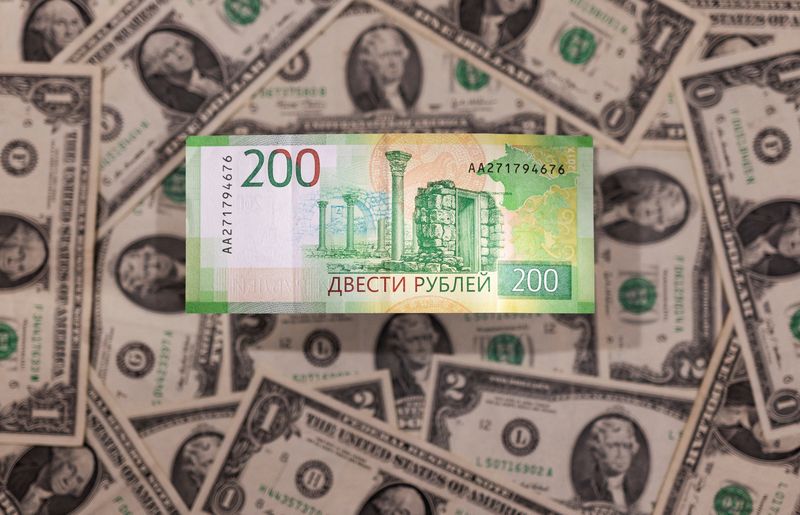 (Reuters) - The Russian rouble firmed in early trade on Thursday, heading towards 62 against the euro on the Moscow Exchange, while stock indexes inched lower, lacking new momentum and trading ideas.

The rouble has become the world's best-performing currency this year as it has been steered by capital controls since for more than three months since Moscow sent tens of thousands of troops into Ukraine on Feb. 24.

The rouble showed little reaction to Russia's decision to relax some capital controls this week, including an increased ceiling for cross-border transactions for individuals and the move to allow export-focused companies to transfer forex to their overseas accounts under certain conditions.

The central bank is now in focus as it will hold a rate-setting meeting on Friday. A rate cut could put some downside pressure on the rouble and support prices of OFZ treasury bonds.

A majority of analysts polled by Reuters expect a 100-basis-point rate cut to 10% as the bank tries to make lending more affordable amid sluggish consumer demand and a pause in inflation.

But a sharper cut to 9% was also possible as economic prospects and inflation easing give the central bank more room to manoeuvre, BCS Global Markets said.

Consumer inflation in Russia slowed to 17.10% in year-on-year terms in May from 17.83% in April, which was its highest level since January 2002, data showed on Wednesday.

Russian stock indexes were down.