Powell's focus on 'pain' of inflation in one data point: More Americans are hungry 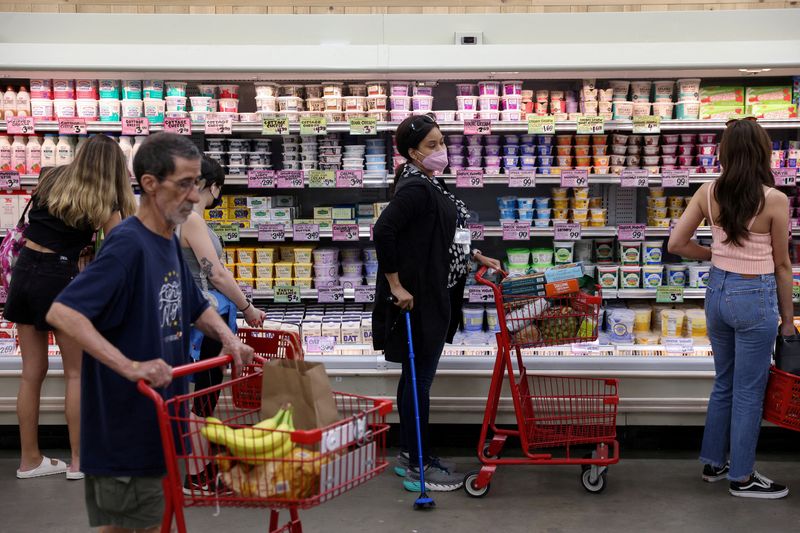 WASHINGTON (Reuters) - Since May, U.S. Federal Reserve Chair Jerome Powell has devoted some of his running commentary on monetary policy, a dense topic that can seem removed from daily life, on the impact inflation has on households and why that makes it so important to bring it under control.

New data released Thursday brought home Powell's point in dramatic fashion, showing that "real" purchases of food for home consumption plummeted by $33.5 billion from April through June from the previous three months. That cut nearly two-thirds of a percentage point from the change in overall gross domestic product, which shrank at a 0.9% annualized rate in the second quarter, exerting one of the largest-ever drags that category has had on the wider economy.

The food spending figure is adjusted for the impact of higher prices, meaning that Americans actually were walking out of grocery stores and corner markets with less in their baskets even though in nominal terms, they'd spent nearly $6 billion more to nourish themselves and their families.

Data from recent Census Bureau surveys of households has offered an even starker lesson: As food prices have risen this year, more people are going hungry, a fact Powell alluded to in his press conference on Wednesday.

"They're going to the grocery store and...in many cases their paycheck doesn't cover the food they're accustomed to buying. We're seeing actual, real declines in food consumption," Powell said. "It's very unfortunate."

His comment likely referred to food purchases, not calories consumed, though the financial stress inflation has brought to consumers may cover that as well.

The share of people reporting to Census surveyors that they are in a household where there was "either sometimes or often not enough to eat" has risen from a recent low of around 8% in the spring of 2021 to nearly 12% last month - a rise that has tracked the acceleration of food prices.

In a striking reflection of how well pandemic assistance programs worked and how deeply inflation is being felt on the ground, the share of people who say they are struggling to pay "usual household expenses" has risen steadily this year to 40%, compared to 26% in the spring of 2021, according to Census' Household Pulse Survey.

Those results, coupled with recent slowing growth in overall consumer spending, suggests that the narrative of strong household balance sheets helping the overall economy avoid recession may not be holding up in the face of the fastest price increases since the 1980s.

It took two recessions to fix inflation back then, and the cure of ultra-high interest rates and rising unemployment contributed to Democratic President Jimmy Carter's (NYSE:CRI) loss in the 1980 election.

The administration of President Joe Biden has said he is leaving it up to the Fed to control inflation. But, heading into critical midterm elections, he is also on the defensive with prices still rising fast and, even given the benefit of a low unemployment rate, a sour public mood.

Data on economic activity is getting weaker, and it is likely at some point that hiring will follow the same slowing trend.

"The expansion looks increasingly tenuous and vulnerable," UBS Chief U.S. Economist Jonathan Pingle said last week. "The consumer has proved less resilient" than anticipated by analyses that assumed large amounts of excess savings stored away during the pandemic would be broadly supportive of economic growth as prices rose.

The steam appears to be leaking fast, and while weakened consumption could help the Fed in its goal of reducing inflation - less demand for goods should mean less pressure on prices - even the hints of weakness that have appeared so far are beginning to stoke opposition to the central bank's tough-on-inflation posture.

At a policy meeting this week the Fed raised interest rates another three fourths of a percentage point, and Powell said more hikes were in store until price increases slow in a "compelling" way.

So far he has given no hint the Fed is ready to give ground in its inflation battle because the economy is slowing - in part because of the damage dealt by higher prices across the economy, particularly to families without the means to pay more for necessities.

But if the slowdown is severe, at some point the same people feeling pinched by prices in the grocery store line will be the ones losing jobs in a recession - and the tradeoffs, of how much additional inflation control can be bought with how much risk to employment, will become more contentious.

The debate may already be starting, with Democratic Senator Elizabeth Warren of Massachusetts, an opponent of Powell's recent reappointment, arguing that the Fed's approach has become "dangerous," and some Powell supporters saying they think he is going too far.

"If they continue on a hawkish path much longer, a recession is quite probable. This would be a huge and avoidable policy mistake," said Josh Bivens, research director at the Economic Policy Institute, who backed Powell's renomination because of pro-worker changes made to the Fed's operating framework. The damaged caused, he argued, would be "far greater than that by single-digit inflation rates."