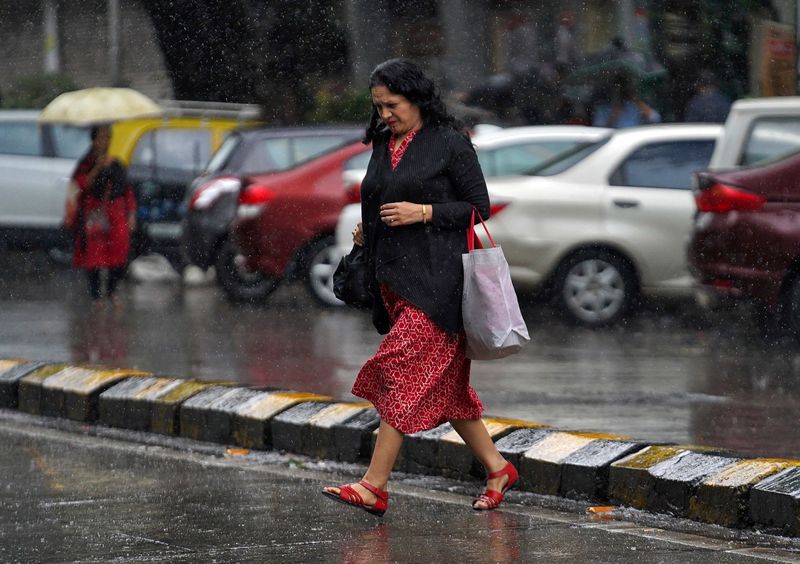 MUMBAI (Reuters) - India's annual monsoon rainfall has covered more than half of the country and conditions are favourable for it to advance into central, northern and western regions this week, the weather department said on Monday.

The monsoon's progress will help farmers accelerate sowing of summer-sown crops, which has been lagging due to below-normal rainfall in the first half of June, especially in central India.

The monsoon has covered all of southern and eastern India and most of the central state of Madhya Pradesh, the India Meteorological Department (IMD) said in a statement.

"Monsoon has revived. This week many regions in southern and central India would get heavy rainfall," an IMD official told Reuters.

Conditions are favourable for the monsoon to advance further into Madhya Pradesh and Uttar Pradesh, said the official, who was not authorised to speak with media so declined to be identified.

India received 8% less rainfall over June 1 - when the monsoon season began - through June 19 compared with a historical average, IMD data showed. For June 1-14, the rainfall deficit was 36%.

The monsoon - which accounts for nearly 70% of India's annual rainfall and is the lifeblood of its $2.7 trillion agriculture-dependent economy - arrived on the coast of southern Kerala state on May 29, two days ahead of usual. Its progress later stalled for over a week.

Sowing of cotton, soybean, corn and paddy has lagged in key producing states, but could accelerate from this week, a senior government official told Reuters.

"Sowing window is still open. Farmers have completed land preparation operations. They will plant crops as soon as they get enough rainfall," the official said, declining to be identified.

Millions of people in the northeast and neighbouring Bangladesh have been marooned because of heavy rainfall in the past few days, but rainfall intensity in the region could moderate this week, the IMD official said.