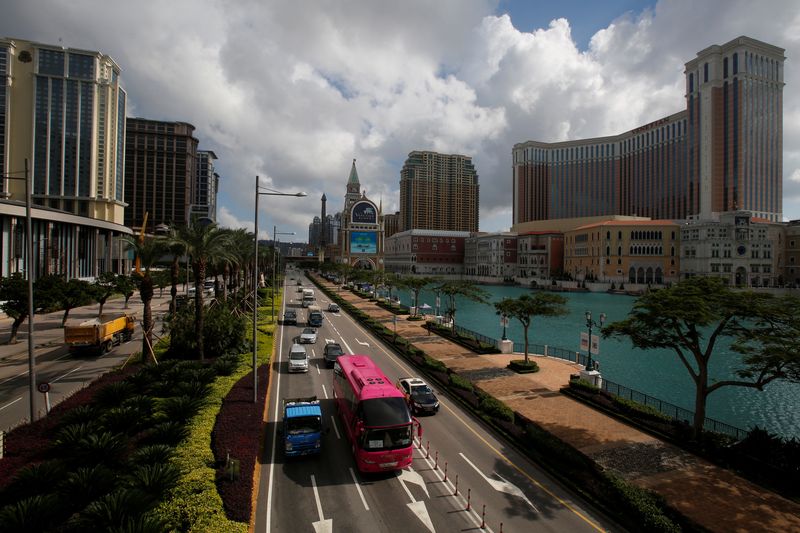 HONG KONG (Reuters) -The number of new casino operators allowed to operate in Macau, the world's largest gambling hub, will continue to be limited to six concessionaires but their operating period will be halved to 10 years, the government said on Friday.

The announcement, which has been long awaited by casino executives, investors and analysts, puts an end to concerns that the government would change the status quo for the number of operators in the Chinese controlled territory.

The former Portuguese colony is the world's biggest gambling hub in terms of money wagered.

It massively tightened scrutiny of casinos in recent years, with authorities clamping down on illicit capital flows from mainland China and targeting underground lending and illegal cash transfers.

A casino executive familiar with the legislation said the government decided not to proceed with the proposal for a government official to directly supervise the casinos after feedback from the operators.

The licences of the six operators, Wynn Macau (OTC:WYNMF), Sands China (OTC:SCHYY), MGM China (OTC:MCHVY), SJM Holdings (OTC:SJMHF), Galaxy Entertainment and Melco Resorts, are all due to expire in June this year.

The government said all existing or potential operators need to apply through a new tender process. It did not detail when operators will have to bid or whether the current licence term will be extended, according to a notice posted on its website.

The consultation focused on nine areas including the number of licences, employee welfare, as well as introducing government representatives to supervise day to day operations at the casinos.

Beijing, increasingly wary of Macau's acute reliance on gambling, has not yet indicated how the licence rebidding process will be judged. To appeal to authorities, operators have tried to bolster their corporate responsibility and diversify into non-gaming offerings.