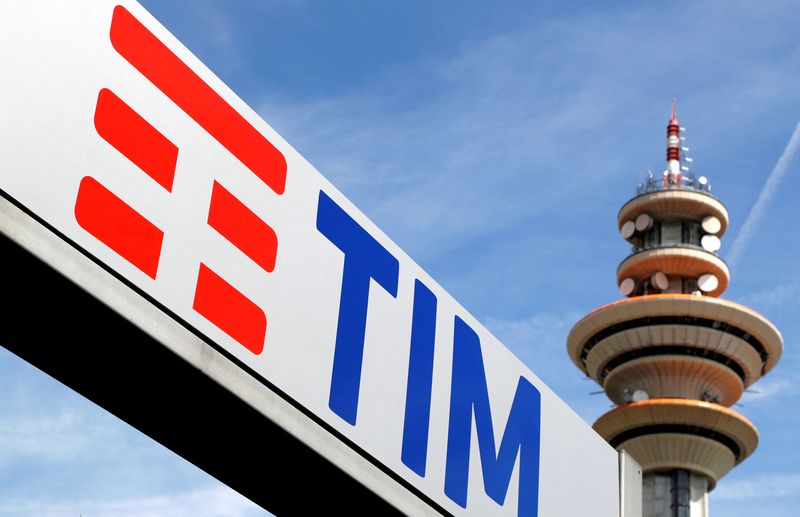 © Reuters. FILE PHOTO: Telecom Italia's logo is seen at the headquarters in Rozzano neighbourhood of Milan, Italy, May 25, 2016. REUTERS/Stefano Rellandin

TIM, which faces a 10.8 billion euro ($12.24 billion) takeover approach from U.S. private equity investor KKR, has been without a CEO since November when Luigi Gubitosi stepped down following a string of profit warnings.

TIM Chairman Salvatore Rossi has called a board meeting on Jan. 21 to appoint a new CEO after a group of five directors, including representatives of TIM's top investor Vivendi (OTC:VIVHY), asked him to speed up the process, one of the sources said.

Labriola, a veteran TIM executive and the current CEO of TIM's Brazilian operations, is drawing up a new three-year business plan to relaunch the group as a standalone business.

"Labriola is a plug-and-play solution and I don't see any concrete rival to him," said a senior manager at Telecom Italia (MI:TLIT).

Debt-laden TIM has been under pressure for years due to fierce price competition in its domestic market. Its strained finances hamper investments to upgrade its network in line with Italy's digital plans.

The business plan includes a possible spin-off of TIM's assets, including its prized fixed network infrastructure, sources have previously said.

Labriola, who has the backing of Vivendi, is set to present an outline of the plan to directors on January 18 in what would mark a major step towards winning over TIM's second biggest shareholder, state lender CDP, and independent board members.

Labriola's plan, which will provide a benchmark to measure TIM's value, is a key element for TIM's response to KKR's proposal, which is conditional on backing by TIM's board and Italy's government.

French media group Vivendi, which owns 24% of TIM, has said KKR's offer does not properly reflect the value of the company.

Mediobanca (OTC:MDIBY) and Vitale&Co are working with TIM on the business plan. Goldman Sachs (NYSE:GS) and LionTree are helping TIM to study KKR's bid and possible alternatives.

CDP recently renewed a call for TIM to rekindle a stalled project to merge its network with that of fibre optic rival Open Fiber, which is 60% owned by CDP itself.

Vivendi has said it is open to handing control of TIM’s fixed network to the Italian state as part of a project led by Italian institutions, in a sign it may be interested in pursuing an alternative plan to KKR’s.

KKR's proposal also entails the separation of TIM's network assets whose oversight would be entrusted to CDP.