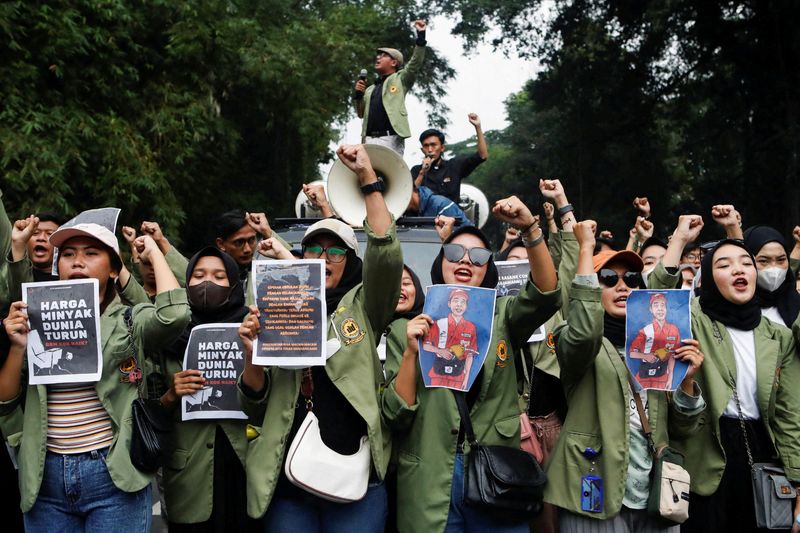 JAKARTA (Reuters) - Indonesia will review minimum wage and other labour rules, the president's office said on Tuesday, after trade unions staged nation-wide protests against a recent hike in petrol prices that they say has come even as incomes stagnate.

President Joko Widodo raised subsidised fuel prices in Southeast Asia's largest economy by 30% earlier this month to rein in a spiralling energy subsidy budget, sparking protests by workers and students across the country.

The fuel price hike is set to accelerate inflation, which has already reached its highest since 2015 due to rising food prices.

Heru Budi Hartono, chief of the president's office, on Monday met with workers protesting at the presidential palace in central Jakarta to discuss their demands, according to a palace statement.

Workers have called for a change in the formula used by the government to determine annual increases in minimum wage, and for changes in the controversial Job Creation law, Heru said in the statement, referring to controversial legislation passed in 2020 that unions said was too pro-business.

Authorities are set to review the workers' demands on Tuesday, Heru said.

With growth and inflation in 2021 still reeling from the pandemic, minimum wage rose by an average of only 1.09% in 2022 across the nation of 270 million people, media reported.

Hermanto Ahmad, secretary general of labour union KSPSI, was quoted in the palace statement as saying the fuel price hike will have a knock-on effect on prices of other necessities.

The KSPSI did not respond to Reuters' request for comment.

Another labour group that has been organising rallies, the KSPI, will continue protesting until the government reverses the fuel price hike, its chairman Said Iqbal told Reuters on Tuesday.