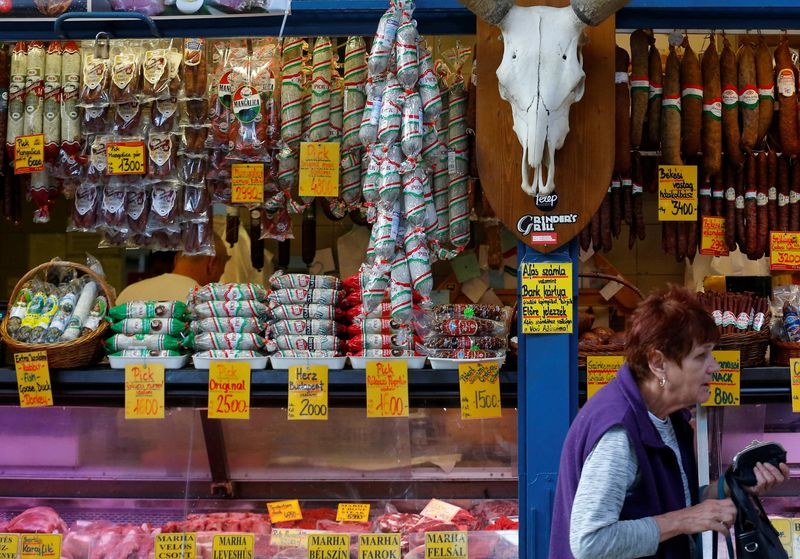 © Reuters. FILE PHOTO: A shopper walks by the stand of a meat vendor at the Grand Market hall in Budapest, Hungary, May 15, 2016. REUTERS/Laszlo Balogh/File Photo

BUDAPEST (Reuters) - Hungary's government has extended a cap on some basic food and fuel prices until Oct. 1, while a cap on retail mortgage interest rates will remain in place until the end of the year, Prime Minister Viktor Orban said on his Facebook (NASDAQ:META) page on Thursday.

Orban's price caps have been a mainstay of efforts by his nationalist government to shield households from the higher cost of living, but even with these measures, inflation rose into double-digit territory last month.

The short announcement on Orban's Facebook page did not contain further detail, likely indicating that the measures would be extended in their current form.

The National Bank of Hungary, already in its third-steepest rate hike cycle since the collapse of communism, was forced to raise its one-week deposit rate further on Thursday to shore up the forint, which fell to a record low versus the euro this week.

So far there is little evidence that the bank's rate rises have meaningfully curbed inflation, which could exceed the NBH's 9.8% forecast for the full year issued in March, Deputy Governor Barnabas Virag told reporters earlier in the day.

Orban's government set a 480 forint ($1.25) per litre limit on fuel prices in mid-November and followed up with caps on some food staples in February. The measures have lopped 5 to 6 percentage points off headline inflation, Orban has said.

The scope of the fuel price cap was recently narrowed to cars with a Hungarian licence plate, triggering conflict with the European Union, while Hungarian energy group MOL has called for the gradual phasing out of the measure.

The extension of a cap on mortgage rates to shield borrowers from the higher cost of borrowing will be an additional hit to banks in Hungary, already slapped with a big windfall tax as part of Orban's measures to cut the budget deficit.