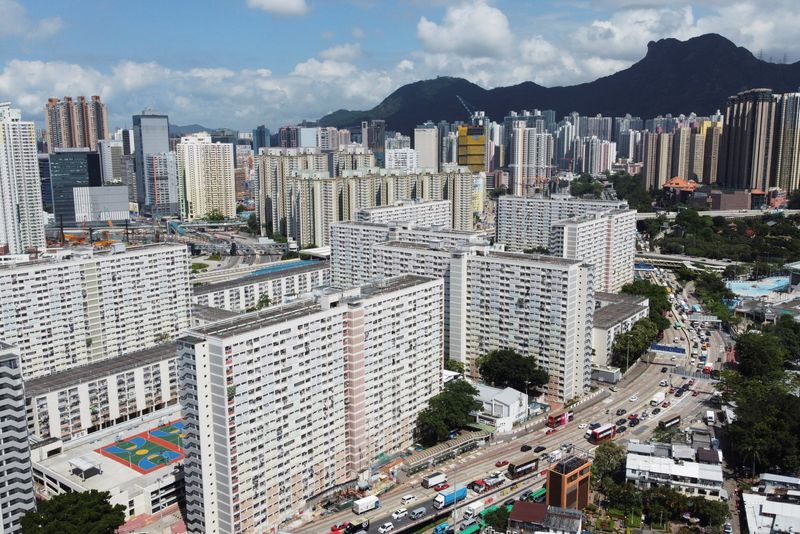 HONG KONG (Reuters) - Hong Kong private home prices fell at a faster pace in June and dropped to the lowest since December 2020, official data showed on Wednesday, as homebuyers stayed on the sidelines due to an uncertain outlook and rising interest rates.

Home prices in one of the world's most unaffordable housing markets slipped 1.1% last month from a month earlier, compared with a revised 0.2% decline in May.

Rates in Hong Kong tend to move in lockstep with U.S. rates, as its currency is pegged to the greenback, although they have lagged their U.S. equivalents in recent months.

But the market expected major banks in the city would likely raise their best lending rates this week, if the U.S. Federal Reserve raises rates sharply as expected later on Wednesday.

One month Hibor - the Hong Kong Interbank Offered Rate, a benchmark used for pricing mortgages - last week rose to its highest since May 2020.

"A rise in interest rates will affect housing transactions in the short term," said Martin Wong, Greater China head of research & consultancy at Knight Frank, adding that it would have more of a psychological impact rather than an actual impact of lowering buyers' repayment ability.

Home prices in the financial hub have dropped 3.4% so far this year.

Hong Kong's economy buckled this year under some of the world's most stringent restrictions to contain COVID-19 outbreaks but sentiment improved after the city eased most of the measures and there were waves of new development launches.