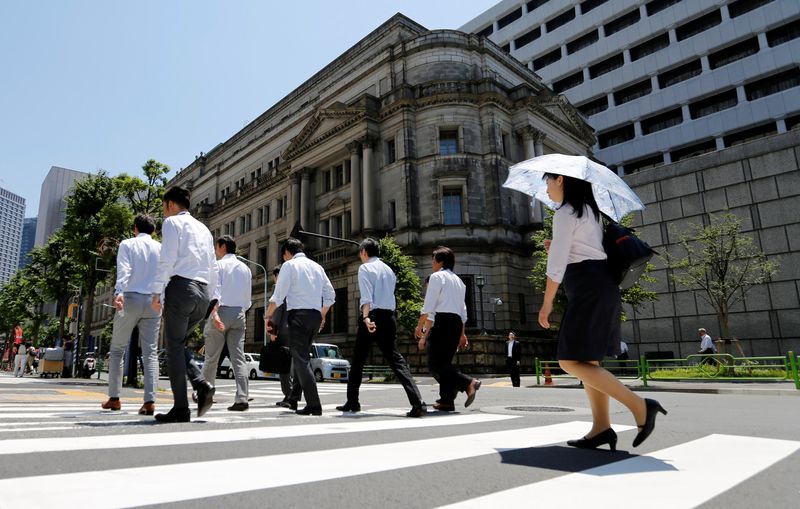 By Leika Kihara and Takahiko Wada

TOKYO (Reuters) - Growing risks of a global economic slowdown will likely prevent the Bank of Japan (BOJ) from phasing out its stimulus programme, at least until 2024, former BOJ executive Kazuo Momma told Reuters on Thursday.

With central banks around the world raising interest rates to cope with soaring inflation, markets are rife with speculation the BOJ, too, will adjust yield curve control (YCC) and allow long-term interest rates to rise more when dovish Governor Haruhiko Kuroda's term ends in April next year.

Given the rising cost of prolonged easing, the BOJ must eventually abandon YCC, which combines a negative short-term rate target with a zero-interest rate cap for 10-year bond yields, and revert to a policy that guides short-term rates around zero, Momma said.

But the BOJ would likely hold off on taking such steps next year as growing prospects of a U.S. recession weigh on Japan's export-reliant economy, he said.

"The BOJ's next biggest challenge is to ditch YCC and negative rates, and shift to a zero-interest rate policy," said Momma, who has experience drafting monetary policy and retains close contact with incumbent policymakers.

"That's hard to do next year, when Japan's economy face headwinds from slowing global growth," Momma said. "It's more likely to happen in 2024, when the economy recovers and there's more clarity on whether wages would rise sustainably," he said in an interview.

Prolonged ultra-low interest rates have hurt the profits of financial institutions, while the BOJ's relentless bond buying to defend its yield cap has distorted the shape of the yield curve.

BOJ policymakers will likely pay more attention to such side-effects and begin laying the groundwork for an eventual shift away from YCC, Momma said.

In ending YCC, the BOJ will offer no advance signals but minimise any market disruption from the announcement by offering to buy bonds flexibly until yield moves stabilise, he said.

The BOJ will also make clear an end to YCC won't be the start of full-blown monetary tightening, but a gradual shift to a more "normal" form of monetary easing, Momma said.

The timing of such a policy adjustment would depend largely on the outlook for wages and the strength of the economy, he said.

"It's very important that Japan sees a virtuous cycle where higher wages drive up inflation. Without that, it's hard for the BOJ to seek an exit from current policy," said Momma, who is currently executive economist at private think tank Mizuho Research & Technologies.