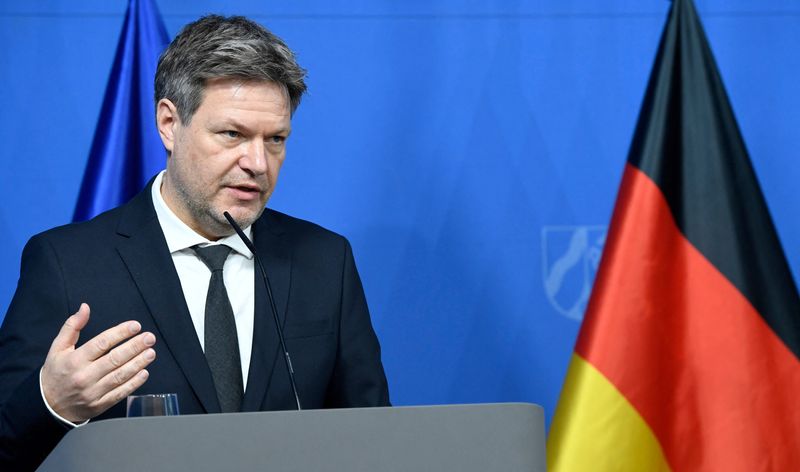 By Riham Alkousaa and Klaus Lauer

BERLIN (Reuters) - The German economy minister on Thursday called for more government funds to support companies as a debate intensifies on whether Berlin should suspend its debt brake next year.

Germany suspended its deficit limit of 0.35% of gross domestic product during the COVID-19 pandemic.

"If we take the right measures now, I don't think it should fail because of the money. It would be the wrong political decision," Habeck said at a Berlin industry conference.

He said the ability of German businesses and industry to invest was a little worrying given high energy prices, adding that replacing Russian energy imports will cost Europe's biggest economy some 60 billion euros ($59 billion) in 2022 and 100 billion next year.

"It has to be done quickly, otherwise it will be too late," he said.

His comments reflect differences within the ruling coalition government where the liberal FDP party oversees the government's coffers.

Earlier on Thursday, Finance Minister Christian Lindner defended his position in sticking to his plan to return to the nation's constitutionally enshrined debt brake next year - even if it is a lonely position.

"According to the current state of things, this is not only possible but also imperative," Lindner said at an insurance industry conference.

However, he said a further suspension of the borrowing limits could be a "last resort" in the event of some unforeseen, catastrophic development.

Germany must not make a norm out of this, Lindner said, adding "even if it makes me feel a little lonelier".

Lindner has previously said planned relief measures were possible within existing budget plans for 2022 and 2023 as inflation boosted tax revenues.

However, government costs are mounting given exploding energy prices.