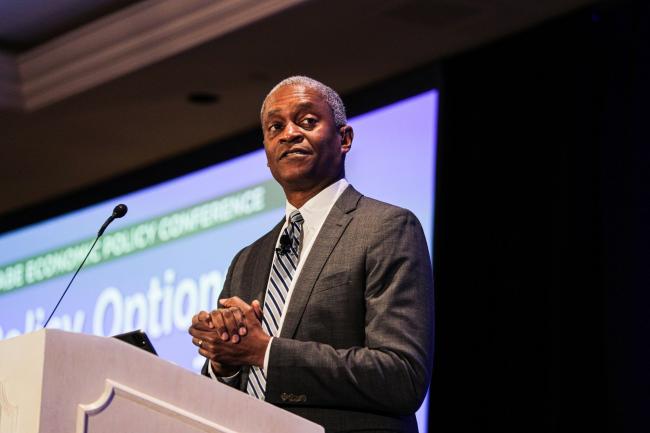 © Bloomberg. Raphael Bostic, president and chief executive officer of the Federal Reserve Bank of Atlanta, speaks during the National Association of Business Economics (NABE) economic policy conference in Washington, D.C, U.S., on Monday, March 21, 2022. The theme of this year's annual meeting is

A half-point hike ‘’is already a pretty aggressive move,” Bostic told Michael McKee in an interview on Bloomberg Television on Monday. “I don’t think we need to be moving even more aggressively. I think we can stay at this pace and this cadence and really see how the markets evolve.”

Fed officials raised interest rates by a half point last week and Chair Jerome Powell signaled they would continue at that pace at meetings in June and July to curb inflation, while pushing back against deploying a larger 75 basis point increase.

Critics say the U.S. central bank was too slow to tighten amid the hottest price pressures in 40 years. James Bullard, St. Louis Fed president, has said while 75 basis points isn’t his forecast, a hike of that size could be considered if needed and was successfully used by the Fed in the 1990s expansion.

“I really think we need to be getting somewhere into the neutral range,” Bostic said, referring to a policy that neither stimulates nor contracts the economy. “For me I am looking at somewhere between 2-2.5% as our neutral range. Then let’s wait and see what’s happening.”

Once policy reaches the neutral range, Fed policy makers could assess whether additional half-point moves are needed, or quarter point moves or no move, he said.

“In my view, we are going to move a couple times -- maybe two, maybe three times -- see what happens, see how the economy responds, see if inflation continues to move closer to our 2% target,” Bostic said. “And then we can really take a pause and see how things are going.”

At the same time, Bostic reiterated that he was committed to doing whatever was needed to bring inflation down.

“The first thing on my mind is that inflation is too high and we need to act definitively and purposefully to try to get that under control,” he said.