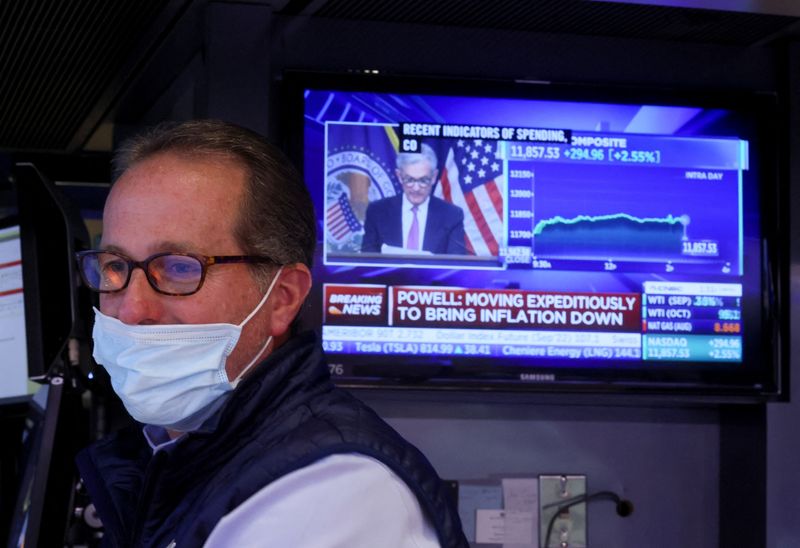 (Reuters) - Federal Reserve Chair Jerome Powell said this week he's looking for compelling signs that inflation is cooling before the U.S. central bank will let up on what's so far been its most aggressive set of interest rate hikes in decades.

In data released on Friday, he largely got the opposite.

Inflation by the Fed's preferred measure, the personal consumption expenditures price index, jumped 6.8% in June, its steepest increase since 1982, and the rise in core prices - excluding food and energy prices and used by the Fed as an indicator of the inflation outlook - accelerated.

Meanwhile labor costs surged 5.1% in the second quarter from a year earlier, the fastest pace in decades.

The data prompted traders of futures tied to the Fed's target policy to begin to price back in another 0.75-percentage-point interest rate increase at the Fed's September policy meeting, putting the likelihood of that outcome at about a one-in-three, up from one-in-four earlier on Friday.

"I'm convinced we're going to have to do more in terms of interest rate increases," Atlanta Fed President Raphael Bostic said in an interview on National Public Radio's "Morning Edition" program before the release of the inflation and wage data. "Exactly how much and then what trajectory will depend on how the economy evolves over the next several weeks and months. We're going to get a lot of data ... before our next meeting" on Sept. 20-21.

The Fed this week raised the target range for its policy rate to 2.25%-2.50%, and for the first time since the current cycle of rate hikes began in March, Powell declined to specify exactly how much he expected the central bank would have to raise rates at its next meeting.

That, along with his comments about softening consumer spending and a nod to the eventual need for reducing the pace of Fed rate hikes, prompted some analysts and equities traders to conclude the Fed would stop its policy tightening soon.

Much of Friday's data appeared to undermine that thesis.

The employment cost data, which Powell said on Wednesday he would be watching, "doesn't provide any evidence that wage growth is slowing and leaves the Fed on track to lift the funds rate another 75bps at its September meeting," Oxford Economics analysts wrote in a note.

But there was some welcome news on the inflation front on Friday, as the University of Michigan's consumer sentiment index showed U.S. consumers in July lowered their views of where inflation is headed. Respondents to the survey indicated they see inflation in the next year easing to a rate of 5.2% from their previous expectation of 5.3% in June. That is the lowest one-year price increase expectation since February.

While that decline may provide some comfort that inflation expectations have not become unmoored, it is still far above the Fed's 2% goal.

The Fed's fast pace of rate hikes this year has already begun to slow the economy, contributing to a negative reading on gross domestic product in the second quarter and fanning worries that the economy is already, or soon will be, in a recession.

Powell is keeping his eye on that slowdown, but he was clear this week that with price stability of "bedrock" importance, his sharpest focus is getting inflation back on track toward the Fed's goal.

"We need to be confident that inflation is going to get back down to mandated consistent levels," Powell said.

Here is a table of key data expected before the Fed's Sept. 20-21 meeting: