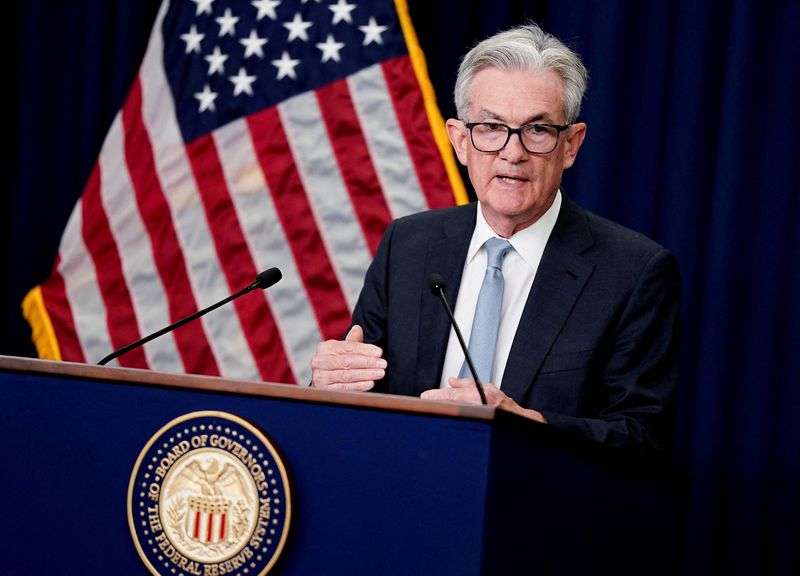 WASHINGTON (Reuters) - The Federal Reserve raised its benchmark overnight interest rate by three-quarters of a percentage point on Wednesday in an effort to cool the most intense breakout of inflation since the 1980s, with "ongoing increases" in borrowing costs still ahead despite evidence of a slowing economy.

"Inflation remains elevated, reflecting supply and demand imbalances related to the pandemic, higher food and energy prices, and broader price pressures," the rate-setting Federal Open Market Committee said as it lifted the policy rate to a range of between 2.25% and 2.50% in a unanimous vote.

The FOMC added that it remains "highly attentive" to inflation risks.

But while jobs gains have remained "robust," officials noted in the new policy statement that "recent indicators of spending and production have softened," a nod to the fact that the aggressive rate hikes they have put in place since March are beginning to bite.

Coming on top of a 75-basis-point hike last month and smaller moves in May and March, the Fed has raised its policy rate by a total of 225 basis points this year as it battles a 1980s-level breakout of inflation with 1980s-style monetary policy.

The policy rate is now at the level most Fed officials feel has a neutral economic impact, in effect marking the end of pandemic-era efforts to encourage household and business spending with cheap money. The rate also matches the high point of the central bank's previous tightening cycle from late 2015 to late 2018, a level reached this time in the span of just four months.

The latest policy statement gave little explicit guidance about what steps the Fed may take next, a decision that will depend heavily on whether upcoming data shows inflation beginning to slow.

With the most recent data showing consumer prices rising at more than a 9% annual rate, investors expect the U.S. central bank to raise the policy rate by at least half a percentage point at its September meeting.

"From here, it is possible that the Fed slows its tightening pace, reassured by the likely peaking of inflation and pullback in inflation expectations as oil prices have fallen," Seema Shah, chief global strategist at Principal Global Investors, said in a note. "However, with the labor market still a picture of strength, wage growth still uncomfortably high and core inflation set to decline at a glacially slow pace, the Fed certainly cannot stop tightening, nor can it downshift gears too much."

In the U.S. Treasury market, which plays a key role in the transmission of Fed policy decisions into the real economy, yields were little changed by the Fed's announcement, with the yield on the 10-year note down 2 basis points on the day and the yield on the 2-year note unchanged.

Stocks on Wall Street held onto broad gains in the session, while the dollar edged lower against a basket of major trading partners' currencies.