Fed tries to thread the needle in forecasting a 'softish' landing 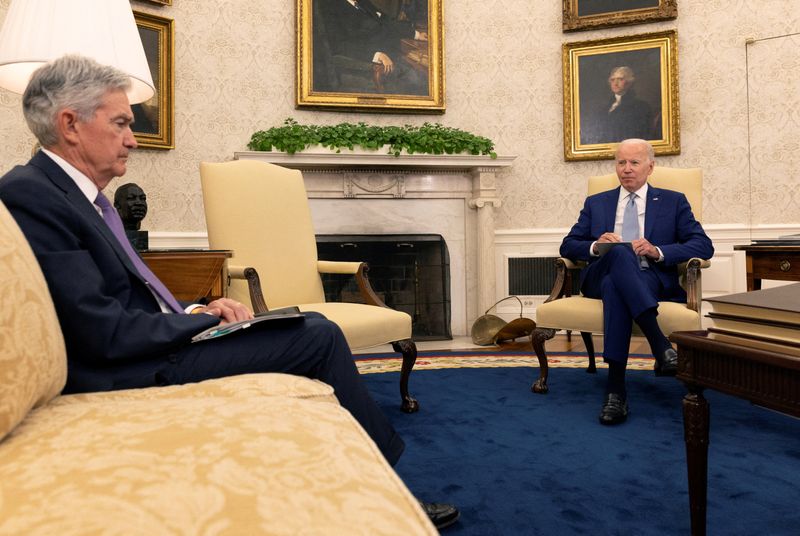 (Reuters) - U.S. Federal Reserve officials, beset by ongoing high inflation and amid a weakening growth picture, will lay out on Wednesday how they think their increasingly difficult goal of cooling the economy without sending it into a tailspin may play out in the months ahead.

That thorny predicament will be on display as Fed policymakers, in tandem with delivering their second half-percentage-point interest rate hike in a row, reveal their latest projections through 2024 and beyond for economic growth, unemployment and inflation. As critically, they will signal the speed and scale of rate rises policymakers believe are needed to quash inflation at a 40-year-high.

What is certain is their forecasts are likely to bear little resemblance to those issued in March, which showed inflation going down without unemployment going up or policy being particularly restrictive.

The meeting comes two weeks after Fed Chair Jerome Powell and U.S. President Joe Biden met amid rising anxiety at the White House that a plentiful jobs picture is being drowned out by soaring costs for everything from rent and food to gasoline and airline tickets.

Powell has previously said the central bank, which in March lifted interest rates for the first time in three years, will keep raising them until price increases come down in a "clear and convincing" way. Policymakers already signaled they plan to match this week's expected increase with another half-point hike at their following meeting in July, bringing borrowing costs to between 1.75% and 2.0% - right where just three months back they thought they would be at year-end.

A hotter-than-expected inflation reading last Friday has even thrown some doubt on those expectations with economists at Barclays (LON:BARC) calling for a three-quarter-point move either this week or in July.

"It's going to be a tricky meeting messaging-wise," said Julia Coronado, a former Fed economist and president of MacroPolicy Perspectives. "It's not a rosy outlook. They don't have any easy choices to make."

U.S. consumer price growth accelerated in May to 1.0% as gasoline prices hit a record high and the cost of services rose further, while core prices climbed 0.6% after advancing by the same margin in April, the Labor Department reported on Friday, underscoring the need for the Fed to keep its foot on the brakes. In the 12 months through May, headline inflation increased 8.6%.

The new set of policymaker projections is set to reflect a faster pace of hikes, slower growth, higher inflation and a higher unemployment rate. The key will be how much for each.

All policymakers are now agreed the Fed needs to get its policy rate up to neutral - the level that neither stimulates nor constrains economic growth - by the end of this year. That rate is seen roughly between 2.4% and 3%.

The median dot for the end of 2022 could easily rise enough to signal at least another half-point increase in September given Friday's worse-than-expected inflation reading. How far the Fed will have to raise rates overall will also move up, with most economists seeing them topping out between 3% and 3.5%.

For the unemployment rate over the next two years, the key is whether policymakers raise it by just a notch or two or show a material rise in layoffs, which would be at odds with their contention that inflation can be tamed without excessive joblessness.

Fed Governor Christopher Waller recently said if the Fed could bring down inflation near its 2% goal while keeping the unemployment rate, currently at 3.6%, from rising above 4.25%, it would be a "masterful" performance.

"I don't think it will change a lot but if it does ... that's a sign they're worried about the possibility of a serious slowdown or recession," said Roberto Perli, also a former Fed economist and head of global policy at Piper Sandler.

HOW MUCH PAIN THE FED'S WILLING TO SWALLOW

Some of the factors keeping inflation so elevated, in particular supply shocks outside the Fed's control due to Russia's invasion of Ukraine that have caused a jump in food and oil prices, show no sign of abating. Overall the central bank still faces tremendous uncertainty on the outlook from that and other supply-chain disruptions caused by the COVID-19 pandemic.

Nor are officials getting much help yet on the demand side with the healthy finances of U.S. banks, companies and households a possible obstacle to curbing inflation as they raise rates in an economy able so far to pay the price.

The longer the Fed struggles to stifle demand and the longer inflation persists, the more likely the rate of price increases becomes embedded and the Fed needs to ramp up its action.

Newly sworn-in Fed governors Philip Jefferson and Lisa Cook, who take their place among the 18-strong policymaking body for the first time, are unlikely to diverge from their colleagues' resolve to lower inflation.

"While Cook and Jefferson are expected to be dovish additions to the Fed, that won't matter much while inflation is 8%, and we doubt they will push back on the Fed's tightening plans any time soon," said Andrew Hunter, senior U.S. economist at Capital Economics.

If the committee consensus does not align with Powell's view of what is needed, he has shown by his recent inter-meeting guidance that he is prepared to lead from the front to make sure inflation is decisively dented.

David Wilcox, a former Fed research director now director of U.S. economic research at Bloomberg Economics and a senior fellow at the Peterson Institute for International Economics, expects Powell to maintain a razor-sharp focus on the inflation side of the Fed's mandate like Paul Volcker, the towering Fed chief who tamed inflation in the 1980s.

"Powell has every intention of going down in history, if necessary, as Paul Volcker version 2.0," said Wilcox.