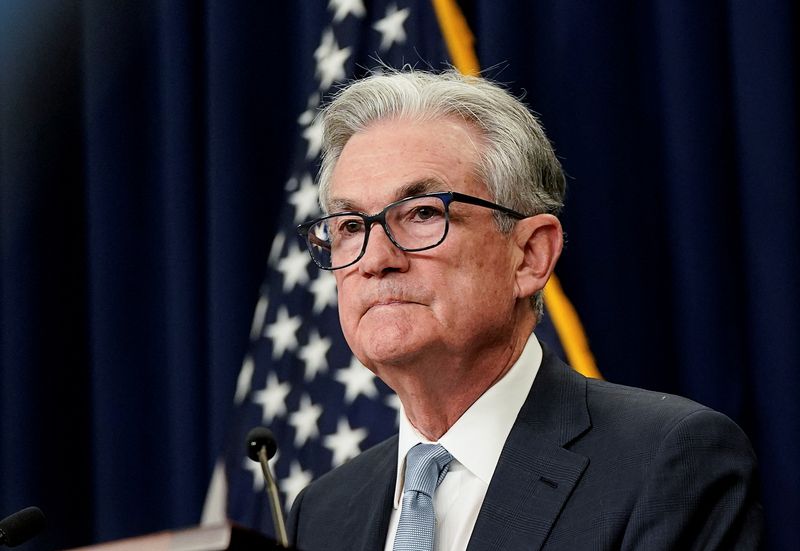 © Reuters. FILE PHOTO: U.S. Federal Reserve Board Chairman Jerome Powell faces reporters after the Federal Reserve raised its target interest rate by three-quarters of a percentage point to stem a disruptive surge in inflation, during a news conference following a t

(Reuters) - The Federal Reserve is "strongly committed" to bringing down inflation that is running at a 40-year high and policymakers are acting "expeditiously to do so," U.S. central bank chief Jerome Powell said on Wednesday.

"It is essential that we bring inflation down if we are to have a sustained period of strong labor market conditions that benefit all," Powell said in a prepared remarks for a hearing before the U.S. Senate Banking Committee.

Inflation continues to run well above the Fed's targeted level of 2%, though there are some indications that a gauge of price increases that excludes volatile food and energy costs may have flattened out or eased somewhat last month, Powell said.

Powell was due to appear before the Senate committee a week after the Fed raised its benchmark overnight interest rate by three-quarters of a percentage point - its biggest hike since 1994. Speaking at a news conference after the policy decision, Powell also elaborated on the increasingly difficult road ahead for the central bank to bring down inflation without causing extensive harm to the economy in the process, especially a significant increase in unemployment.

"Our objective really is to bring inflation down to 2% while the labor market remains strong ... What's becoming more clear is that many factors that we don't control are going to play a very significant role in deciding whether that's possible or not" Powell said last week, citing the war in Ukraine and global supply concerns.

"There is a path for us to get there ... It is not getting easier. It is getting more challenging."

In his statement to the Senate committee on Wednesday, Powell reiterated that ongoing increases in the Fed's policy rate would be appropriate, but "the pace of those changes will continue to depend on the incoming data and the evolving outlook for the economy."

"Inflation has obviously surprised to the upside over the past year, and further surprises could be in store," he said, adding that policymakers would need to be "nimble" in response to the incoming data and evolving outlook.

Powell's remarks to the committee also showed just how much the inflation environment has changed in the three months since he delivered the first of his semi-annual reports to lawmakers.

At that time, he described inflation - which was running at 6% a year by the Fed's preferred measure - as "likely to decline over the course of the year." Little sign of that has emerged since those remarks, despite three rate hikes that have lifted the Fed's policy rate to a range of 1.50% to 1.75% from near zero in the space of 13 weeks - with more increases in borrowing costs to come.

Projections released by Fed policymakers last week showed they expect economic growth to slow to below trend this year while the U.S. unemployment rate - currently 3.6% - starts to tick higher. Meanwhile, they have materially tempered their expectation for how quickly inflation will subside, with a median forecast for a year-end annual rate easing to 5.2% by their preferred measure from 6.3% as of April. In March, they had put that figure at 4.3%.

Prices of Fed funds futures contracts have fully priced in a 75-basis-point rate hike at the central bank's July policy meeting and around even odds of a policy rate in the 3.50%-3.75% range at the end of this year.

Powell's remarks to the Senate committee kicked off the first of two days of semi-annual congressional appearances to update U.S. lawmakers on the state of the economy and monetary policy; he will testify before the U.S. House of Representatives Financial Services Committee on Thursday.