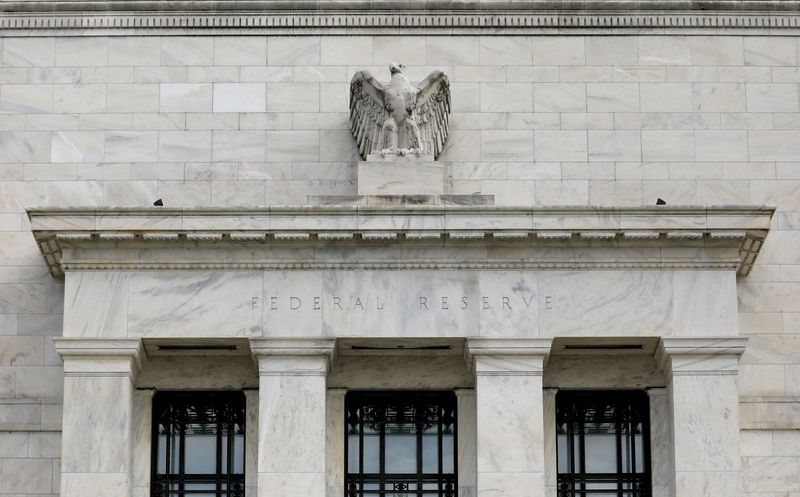 By Jonnelle Marte and Dan Burns

(Reuters) - The Federal Reserve is ready to cut back its holdings of more than $8 trillion of bonds, with a readout of the U.S. central bank's meeting last month suggesting that process could get underway later this year.

It signals an important difference from how the Fed managed its policy "normalization" after the 2007-2009 financial crisis, and a much swifter removal of extraordinary accommodation overall than last time. It also shows officials have greater confidence in the strength of the current economic recovery from the coronavirus pandemic than they did following the recession more than a decade ago.

Fed Chair Jerome Powell told reporters after the Dec. 14-15 policy meeting that policymakers may be able to move more quickly than in the past when it comes to shrinking the balance sheet, observing that officials see "a significantly different economic situation that we have at the current time."

Minutes of that meeting released on Wednesday showed officials had engaged in a lengthy discussion about shrinking the central bank's balance sheet, a move that could have significant impact. Financial markets are responding, with bond yields marching higher on the Treasury maturities sensitive to the Fed's signals on both interest rates and its balance sheet.

1) WHY ARE THE FED'S ASSET HOLDINGS IMPORTANT?

The Fed first started using large-scale asset purchases - also called quantitative easing, or QE - during the 2007-2009 financial crisis when it became evident that simply cutting short-term interest rates, its traditional policy lever, would not be sufficient on its own.

Buying tens of billions of dollars at a time of Treasuries and mortgage-backed securities helped lower longer-term borrowing costs for businesses and households, and helped mend a shattered credit market and foster an economic recovery, although it took years.

After three waves of purchase programs between 2008 and 2014, the Fed had amassed roughly $4.25 trillion of bonds, and the yield on the 10-year U.S. Treasury note, influential for rates on everything from car loans to home mortgages, had fallen from above 4% to well below 2%.

When the coronavirus pandemic unfolded in early 2020, it caused a worldwide panic in financial markets, and the Fed again responded with massive bond purchases as well as interest rate cuts. Its bondholdings now total about $8.3 trillion, with roughly $5.65 trillion in Treasuries and $2.65 trillion in MBS. It owns roughly a quarter of the Treasury market.

2) WHY DO OFFICIALS WANT TO ACT MORE AGGRESSIVELY THIS TIME?

Fed officials say the U.S. economy today is much stronger than it was during the previous periods when the central bank was removing policy accommodation. Officials want to make sure they have the leeway to respond to high inflation that is well above their 2% target. They're also encouraged by improvements in the labor market and are convinced they are nearing their maximum employment goal, according to the minutes of the December meeting. That would mean there is not as much of a need for the Fed's support.

Several policymakers are also worried that the Fed's large balance sheet and its policy of keeping interest rates at an ultra-low level could be contributing to rising asset prices. Home values surged during the pandemic as some families sought to capitalize on low mortgage rates to move away from dense city centers. With equity markets recently reaching record highs, officials also do not want to be seen as fueling unwanted asset bubbles.

3) WHAT HAPPENED WHEN THE FED REDUCED ITS BALANCE SHEET LAST TIME?

When the Fed stopped adding to its bondholdings at the end of 2014, it initially held off on reducing the size of its balance sheet for years, even after it had begun raising interest rates in late 2015. Officials viewed the recovery then as much softer than the current rebound from the short but deep recession in early 2020.

The central bank finally started the shrinkage in 2018, allowing a certain number of bonds to mature each month without the repaid principal being reinvested in new securities, a process that became known as quantitative tightening, or QT. About $650 billion of bonds had rolled off the Fed's portfolio by September 2019 when it was forced to abruptly stop QT after a key short-term credit market went haywire and it became evident that too much money had been drained from the system.

Minutes of last month's meeting showed that "many" Fed officials judged the appropriate pace of its balance sheet reduction would be faster this time.

4) THE LAST QT ENDED WITH UPHEAVAL IN A KEY MARKET. CAN THAT HAPPEN AGAIN?

In 2019, the level of reserves that banks held with the Fed fell too low. That cash shortage led to a spike in short-term borrowing rates and required the central bank to intervene in money markets to keep them functioning.

Many financial firms are now dealing with the opposite problem – too much cash. The Fed also has a new tool called a "standing repo facility" - or SRF - that can be a backstop for companies that are short of cash, although it has never operated in a QT environment.

Minutes from last month's policy meeting show Fed officials remain uncertain about just how far they can go in draining reserves, and they say they will keep a close eye on money markets for signs of any cash crunch as they shrink the bond holdings.

Still, several officials said the SRF could lower demand for reserves, according to the minutes, potentially allowing for a smaller balance sheet than would be manageable in the absence of such a tool.