European shares slide over 1% ahead of U.S. inflation data 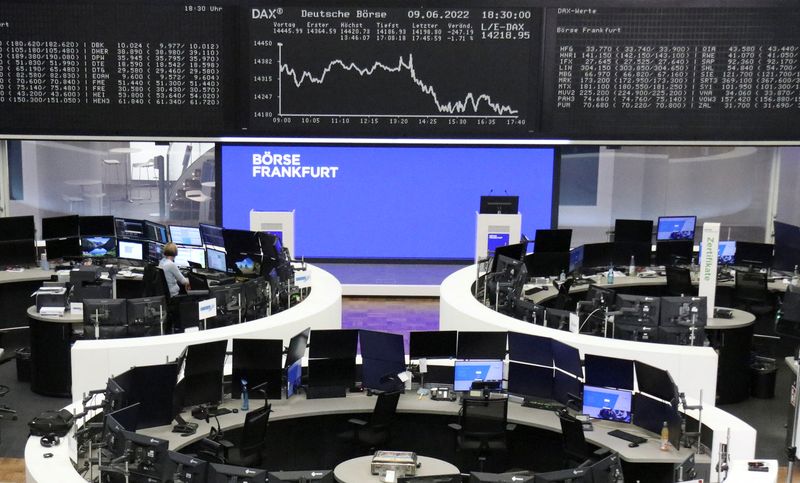 (Reuters) -European shares slumped 2.3% to hit three-week lows on Friday after U.S. inflation came in hotter than expected, raising the prospect of a recession as central banks try to put a lid on prices.

Losses on the pan-European STOXX 600 index were broad-based, led by a 4% slide in banks. The index extended declines to a fourth straight session, putting it on course for weekly losses of more than 3%.

Italy's MIB index sank 4.5% to three-month lows. Spain's IBEX gave up 3.3%, while other major bourses in the region lost more than 2% each.

Headline inflation for May in the United State came in at 8.6%, topping an expected 8.3%, suggesting that the Federal Reserve could continue with its 50 basis points interest rate hikes through September to combat inflation. The Fed's take on inflation at its meeting next week will be closely watched.

Equities were hammered on Thursday after the European Central Bank said it would deliver next month its first interest rate hike since 2011, and a potentially larger move in September.

"Markets are in a state of nervousness because the stickiness of inflation essentially forces the central banks to double down on their tightening," said Dhaval Joshi, chief strategist at BCA Research. "The most important question is whether central banks are going to take the economy into recession to conquer inflation."

"Then the sell-off will transform from a valuation sell-off to a profit sell-off."

Banks, already suffering from heavy losses in peripheral lenders such as those in Italy, accelerated losses on worries about widening spreads between bond yields in Italy and Germany.

"The second reason for banks is that if we're in a stagflation risk, then obviously banks will do badly because of the rising default rates, bad loans and bad debt provisioning," Joshi said.

Investors pulled out money from European equity funds in the week to Wednesday, marking the 17th consecutive week of outflows, due to uncertainties related to the Russia-Ukraine war, BofA said.

Among individual stocks, GSK rose 1.4% after the drugmaker said its vaccine for respiratory syncytial virus was successful in a late-stage trial involving older adults.