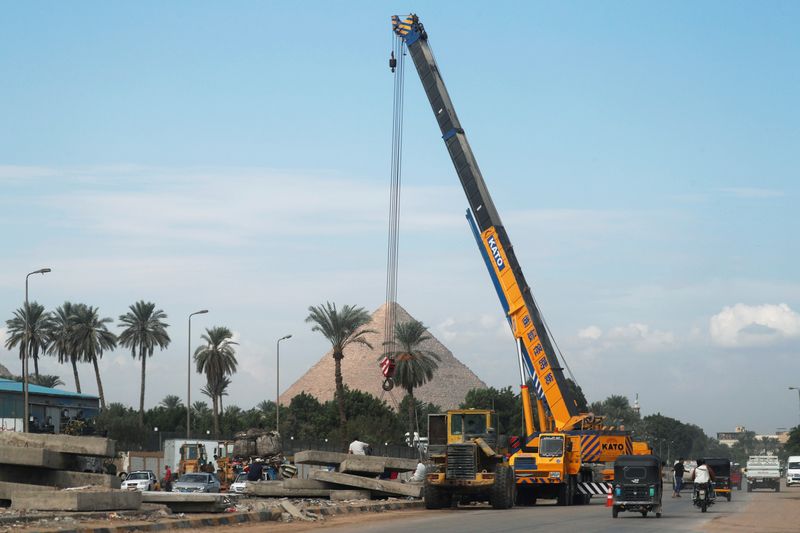 © Reuters. Egyptian labourers work at a construction site of a new road as the pyramid of Khufu or "Cheops" is seen in the back, in Giza, Egypt, November 9, 2020. REUTERS/Amr Abdallah Dalsh/Files

The inflation figure was the highest since December 2017, when it hit 21.9%. The price rises followed a currency devaluation in October and restrictions on imports.

The median forecast in a Reuters poll of 15 economists had projected inflation of 20.50%. Five economists also forecast that core inflation, due later on Tuesday, would come in at a median 23.6%, up from 21.5% in November.

The central bank allowed the Egyptian pound to depreciate by about 14.5% on Oct. 27 and let its value continue to weaken slowly and incrementally in November and December.

"Food and beverages were up 4.6% month-on-month (adding to the 4.5% in November), impacted mainly by bread and cereals, dairy, vegetables and meat," said Allen Sandeep of Naeem Brokerage.

This goes somewhat towards absorbing a 25% devaluation in late October but portends more inflation to come, Sandeep said.

"Now combined monthly inflation has risen by around 7% over three months. This is close to a 30% pass through to the urban CPI index. With the new round of devaluation ongoing, which we expect to be roughly 15%, we can expect annual CPI to touch 25% by February."

Egypt's surging prices will add to pressure on the central bank's Monetary Policy Committee to raise interest rates when it next meets on Feb. 2.