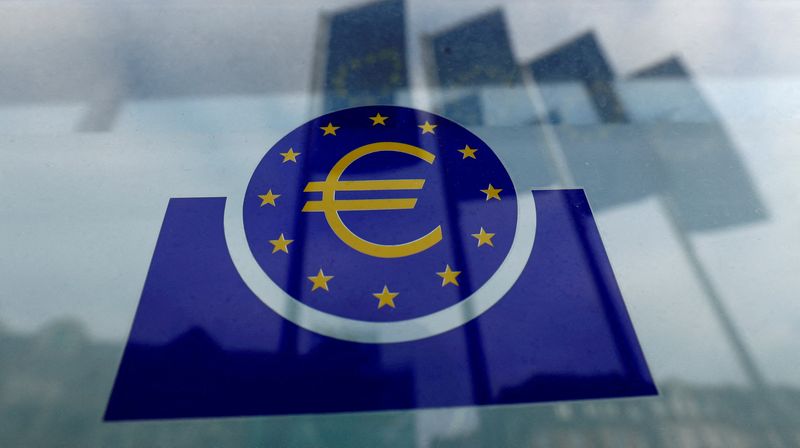 FRANKFURT/MILAN (Reuters) - The European Central Bank promised fresh support and a new scheme on Wednesday to temper a market rout that has fanned fears of a new debt crisis on the euro area's southern rim but appears to have disappointed investors looking for bolder steps.

Government borrowing costs have soared on the 19-country currency bloc's periphery since the ECB unveiled plans last Thursday to raise interest rates to tame painfully high inflation that is at risk of becoming entrenched.

The sell-off was then exacerbated by the ECB's decision not to detail it plans to limit this rise in borrowing costs, raising fears that policymakers were too complacent about the situation of more indebted nations, such as Italy, Spain and Greece.

Facing the threat of a repeat of the debt crisis that almost brought down the single currency a decade ago, the ECB reversed course, planning a new support scheme and directing cash from debt maturing in its recently-ended 1.7 trillion euro ($1.8 trillion) pandemic support scheme towards indebted nations.

"The Governing Council decided to mandate the relevant Eurosystem Committees together with the ECB services to accelerate the completion of the design of a new anti-fragmentation instrument for consideration by the Governing Council," the ECB said after an extraordinary meeting.

Speaking at conference on Wednesday, Dutch central bank chief Klaas Knot said that policymakers asked ECB staff to work at an accelerated pace on the new tool in case sending reinvestments south were not enough.

"We don't know whether it will be enough, it depends on how the markets will respond. But if it will not be enough, rest assured that we stand ready," Knot said.

His Slovak counterpart, Peter Kazimir said it was still "premature" to discuss the details of what a new tool would look like.

Investors welcomed the ECB's intentions but were still disappointed by the lack of detail and the lack of a firm commitment.

"I think essentially it is the bare minimum of what could be expected, but I also believe it's the most realistic outcome of what they could compromise today," Danske Bank economist Piet Christiansen said.

He added that asking staff to devise a plan also bought policymakers some time to see how the market would settle on its own.

The euro fell around 0.7% against the dollar after the ECB statement while Italian yields jumped around 7 basis points.

The spread between 10-year Italian and German bonds, a key indicator, meanwhile widened to 241 in the immediate aftermath of the announcement but then recovered to 231, indicating confidence that the ECB will act more firmly, perhaps at the July 21 policy meeting, when it is all but certain to raise rates for the first time in over a decade.

"The decision on reinvestments was the minimum that the ECB could have got away with today," Jack Allen-Reynolds at Capital Economics said.

"There is no guarantee that they reach a consensus on such a tool at the next policy meeting in July, so we could see spreads widen further before a new tool is in place," he added.

The ECB's move comes on the same day that the U.S. Federal Reserve is expected to hike interest rates, with investors dramatically raising their bets for a 75 basis point increase, a swing in expectations that has fuelled a violent sell-off across world markets.

Italian spreads peaked at around 250 basis points on Tuesday, their highest since early 2014 raising worries that Italy's high debt level could become unsustainable.

There is no universally accepted level for this spread, but Carlo Messina, the CEO of Intesa, Italy's largest bank, earlier on Wednesday said the country's economic fundamentals would justify 100 to 150 basis points.

ECB President Christine Lagarde is due to speak at 1620 GMT in London in an engagement scheduled earlier. ECB board member Fabio Panetta will also speak at 1315 GMT, though his speech will be about a digital euro. Both are expected to be answering questions.