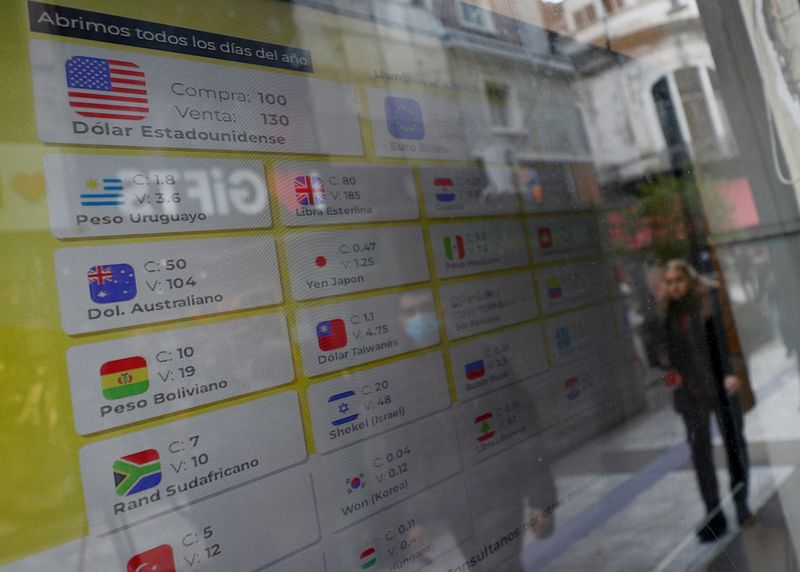 BUENOS AIRES (Reuters) - Argentina will allow foreign tourists to exchange dollars at a significantly higher rate than previously available, the Ministry of Economy said on Thursday, as the country reckons with depleted foreign currency reserves.

"Argentina needs the dollars brought in by tourists," Minister of Tourism Matias Lammens told journalists on Wednesday before the measure was announced. "Today, due to the exchange rate gap, many of those dollars do not enter the central bank."

After years of rampant inflation and a spiraling financial crisis, Argentina's central bank urgently needs to increase its reserves. With tight foreign exchange controls, many Argentines and tourists bypass the formal currency exchange altogether, buying or selling dollars in the black market.

Currently, dollars are worth more than twice their value in Argentine pesos in the black market than at the official rate.

The measure to be adopted by the country's central bank will allow foreign tourists to sell dollars at the financial markets rate, known as MEP, that is much closer to the black market rate.

"We are working so that tourists effectively liquidate those dollars (...) to the formal exchange market," Lammens said.

Foreign tourists will be allowed to sell up to $5,000 in authorized entities by presenting the identification document used to enter the country, the economy ministry said.

The exchange operators should require a sworn statement from the client stating that the person is a tourist and that, in the last 30 days and in the group of entities, has not carried out operations that exceed the equivalent of $5,000 dollars, the central bank said.