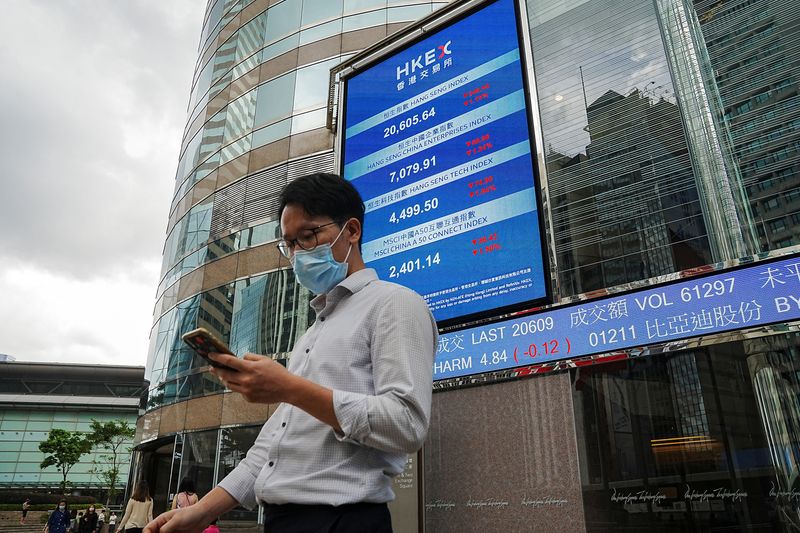 HONG KONG (Reuters) - The majority of stocks listed in Hong Kong since the start of last year are trading well below their initial selling prices, data showed, leaving investors out of pocket and dimming prospects for a pick up in share sales for rest of 2022.

Of 132 initial public offerings (IPOs) and secondary listings on the city's stock exchange since the start of 2021 - collectively raising $47.6 billion - 111 are currently trading in the red, showed data from analytics firm Dealogic.

Markets have been ravaged over the past two years by a storm of volatility, with economic disruption from the COVID-19 pandemic, war in Ukraine, inflation and interest rate hikes in major economies, as well as a wave of Chinese regulation.

"All new deals aren't the same, some look okay, but many IPOs being offered currently, in many of the cases just don't have the same appeal as quality companies currently listed with a long earnings history trading well below intrinsic value," said Sam Lecornu, co-founder of fund manager Stonehorn Global.

"Why buy an IPO when a better company is already listed at better price, I think this is what the market is telling you."

Property developer Sanxun Holdings Group Ltd is the worst-performing new listing over the past 19 months, with its stock down 93% since its IPO in July last year.

Healthcare firm Broncus Holding Corp is off 86% and Suzhou Basecare Medical Corp Ltd has lost 85.1% since listing in February 2021.

The biggest deal this year is likely to be that of Shanghai-listed China Tourism Duty Free Corp Ltd. The firm has filed for a Hong Kong secondary listing that could raise $2 billion to $3 billion in the third quarter, sources have told Reuters. China Tourism did not respond to a request for comment.

So far, the biggest deal was that of Chinese commerce platform Huitongda Network Co Ltd which raised just $297 million in February.

"The small number of deals and the lack of large-scale, eye-catching IPOs has caused investors to pay less attention to the IPO market, reducing their enthusiasm for investing in them," said securities strategist Kenny Ng at Everbright International.

Dealmakers are hoping for a pick-up in listings to mitigate what is otherwise set to be Hong Kong's slowest year since 2009.

"I think into November and even into next year we could start to see some increase in IPO activity," said Arthur Tso, a partner at DLA Piper.

"There seems to be a number of deals which are waiting for the window to open as to when they could tap the markets but it feels like the fourth quarter will be the most likely option for that to happen."