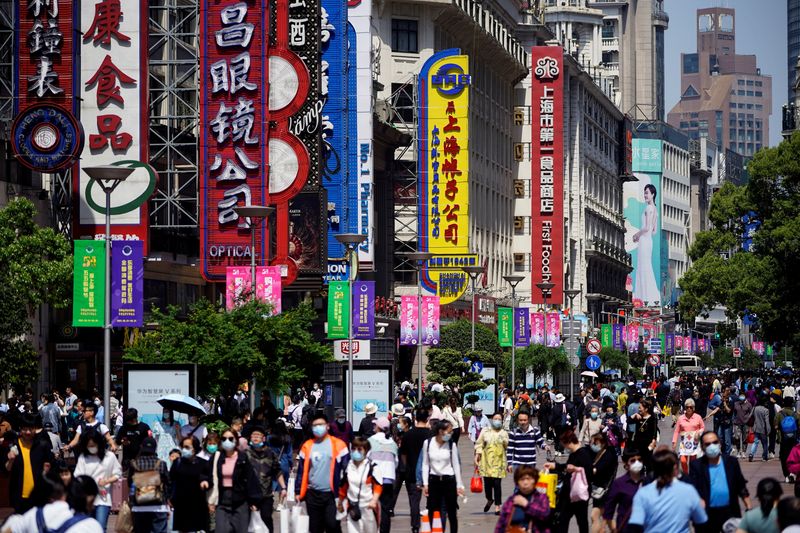 BEIJING (Reuters) -China's factory-gate inflation cooled to its slowest pace in 14 months in May, depressed by weak demand for steel, aluminium and other key industrial commodities due to tight COVID-19 curbs and bucking the global trend of rapidly accelerating prices.

The producer price index (PPI) rose 6.4% year-on-year, the National Bureau of Statistics (NBS) said on Friday, after an 8.0% rise in April and in line with forecasts in a Reuters poll. It was the weakest reading since March 2021.

The consumer price index (CPI) gained 2.1% from a year earlier in May, in line with April's growth. In a Reuters poll, the CPI was expected to rise 2.2%.

The cooling inflation marks a sharp contrast to decades-high readings seen in other major economies and reflects the slump in demand due to China's strict COVID-19 controls, which has chilled factory and retail activity in recent months.

The modest price pressures also allow China's central bank to release more stimulus to prop up the economy even as monetary authorities in most other countries scramble to hose down inflation with aggressive interest rate hikes.

"Factory gate inflation will continue on its downward trajectory throughout the rest of the year," said Sheana Yue, China Economist at Capital Economics.

"Further policy rate cuts before long – the first of which might come as soon as next Wednesday," she noted, referring to the People's Bank of China's medium-term liquidity operations next week.

China's cabinet in late May announced a package of 33 measures covering fiscal, financial, investment and industrial policies to revive its economy.

Chinese auto sales grew in May from April but were still down 16% year-on-year, according to the Chinese Passenger Car Association.

The urban jobless rate rose to 6.1% in April, the highest since February 2020 and well above the government's target ceiling of 5.5%.

Non-food prices rose 2.1% from a year earlier, 0.1 percentage point slower than the previous month, affecting the CPI by about 1.68 percentage points, the NBS said in a separate statement.

"The transmission from PPI to CPI has turned out to be muted, because of weak domestic demand."

Beijing has taken a series of measures from cutting benchmark lending rates to allowing delays on loan repayments to arrest the economic slowdown.