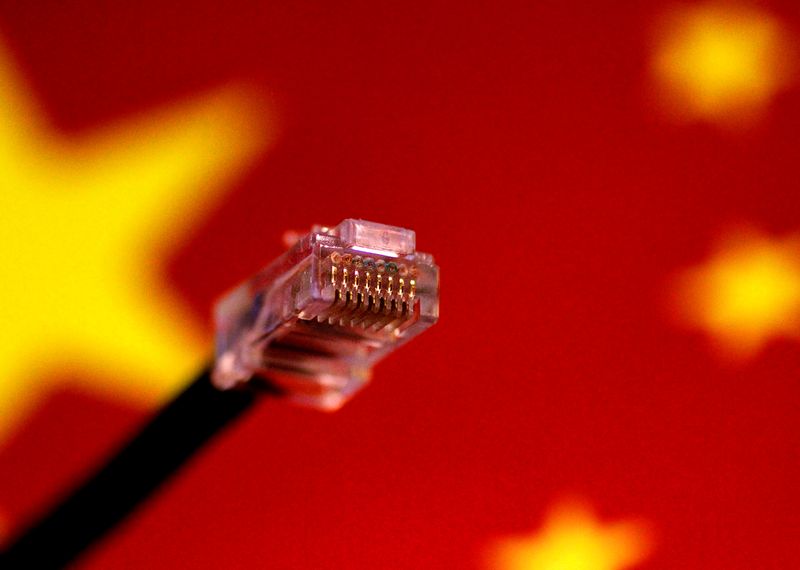 © Reuters. FILE PHOTO: A computer network cable is seen above a Chinese flag in this July 12, 2017 illustration photo. REUTERS/Thomas White/Illustration

Carolyn Pokorny, the top deputy U.S. Attorney in Brooklyn, said at a cybersecurity conference at New York's Fordham University that U.S. service providers have told prosecutors they cannot respond to some search warrants because the data being sought is held by a China-based entity.

"By moving the data to the PRC, service providers are increasingly putting evidence of crimes out of the reach of prosecutors and agents," Pokorny said, referring to the People's Republic of China.

Pokorny declined to provide details on specific cases in which prosecutors could not access data stored in China.

China's embassy in Washington did not immediately respond to a request for comment.

Pokorny said the problem stems from Beijing's efforts to get companies to store Chinese customers' data in China, rather than the United States and Europe.

That could result in U.S. residents ending up with data stored in China, she said.

Beijing can also use its control over electronic data to target dissidents living abroad, Pokorny said.

U.S. prosecutors have accused several individuals of intimidating U.S.-based critics of China on behalf of the government in Beijing.

Speaking at the same conference, Damian Williams, the top federal prosecutor in Manhattan, encouraged service providers that learn of criminal activity through data they host to report it to law enforcement rather than wait for search warrants.