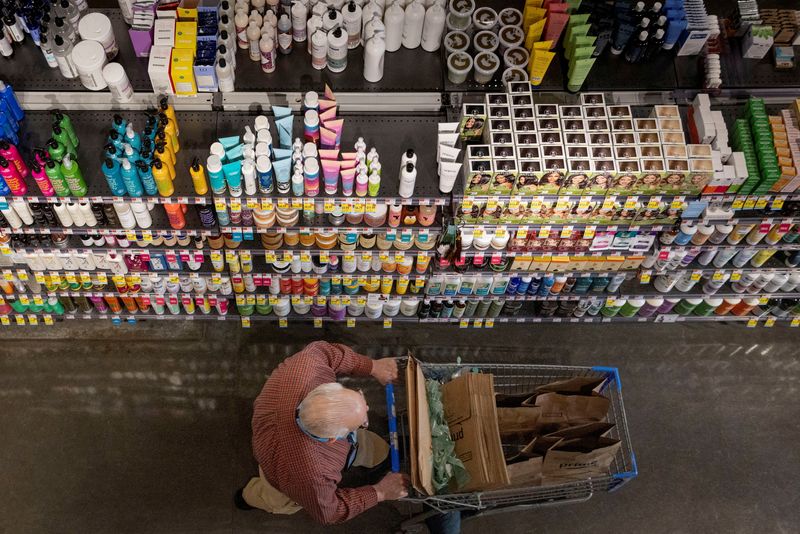 NEW YORK (Reuters) - Economic data expected on Friday has market participants anxiously waiting for confirmation that decades-high inflation reached its summit in March and has commenced its long hike back down the mountain.

While the Labor Department's Consumer Price index (CPI), which tracks the cost to urban consumers of a basket of items, is expected to accelerate to 0.7% from 0.3%, when stripped of volatile food and energy products, it is seen cooling a nominal 0.1 percentage point to 0.5%.

Year on year, consensus has headline CPI holding steady at a blistering 8.3% and sees a "core" CPI print of 5.9%, which would mark a welcome 0.3 percentage point decline.

"You're going to see a high headline number, mostly because of fuel and food," said Peter Tuz, president of Chase Investment Counsel in Charlottesville, Virginia. "But the core number will probably mitigate some."

"It’s a trend in the right direction," Tuz added.

A lower core reading would be the second among major indicators to show inflation's April pullback was not a fluke. The first sign was the wage growth element in last Friday's employment report.

Resurgent demand versus hobbled global supply chain - the recovery of which has been stymied by Russia's war on Ukraine and recent Chinese COVID restrictions - have sent prices soaring well beyond the U.S. Federal Reserve's average annual 2% target.

The central bank has sprung into action in recent months, raising the Fed funds target rate by 75 basis points in its efforts to toss cold water on the economy and rein in inflation.

While some economists fear this abrupt tightening could cool the economy into recession, a broad range of recent data, covering the labor, manufacturing and housing markets, for example, have hinted at the prospect that the economy is cooling on its own, and might give the Fed - which has pledged to remain agile in its response to economic data - some wiggle room to take a more dovish turn this fall.

As a result, consumers - who contribute about 70% of U.S. economic growth, are saving less, dipping into savings and putting more purchases on plastic, even as their sentiment remains low and their inflation expectations stay elevated.

"A lot of people are hurting to cover food and energy prices," Tuz said. "It’s a painful environment out there."

"Savings is down and credit use is up."

After Friday's CPI report, market participants will turn their focus to next week's Producer Prices data and the statement from the Fed due on Wednesday at the conclusion of its two-day monetary meeting, at which the central bank is seen implementing the second of its three consecutive expected 50-basis-point interest rate hikes.

But for now, CPI has the spotlight.

If it shows "a shockingly high base number and a mitigating core number, the markets might be OK with that," Tuz added.

"We'll know by tomorrow at this time."