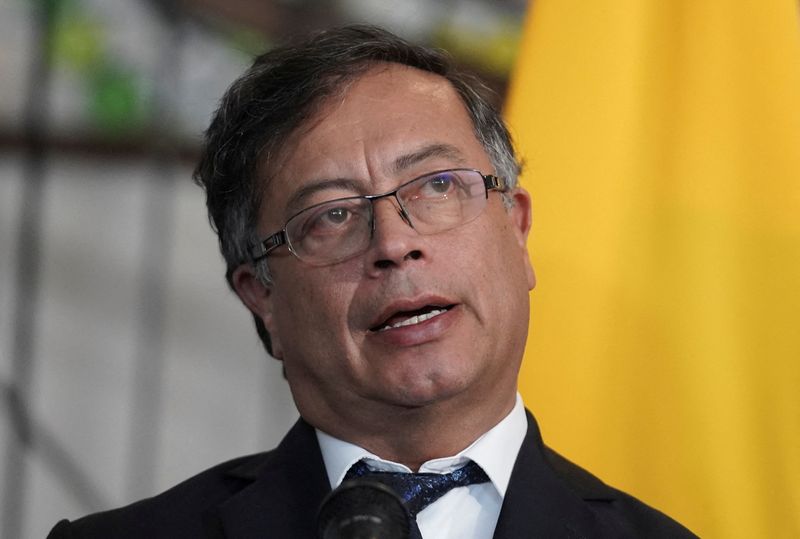 BOGOTA (Reuters) - Colombians are expressing cautious optimism about the government of incoming leftist President Gustavo Petro, days before he takes office on promises to reshape the polarized country with a raft of reforms and social programs.

Petro, a former member of the M-19 guerrillas and erstwhile senator, will on Sunday become the first leftist to govern Colombia, which has historically elected centrist and right-wing leaders.

"We've never been governed by the left," said bus driver Hernan Vargas, 55, in the southeastern Bogota neighborhood of El Rocio. "There's a lot of hope."

Many people in this working-class hillside district, with views down to the presidential palace and congress, said they voted for Petro and approve of his record as the capital's mayor.

"I know with him we'll have a new Colombia," said potter Jorge Eliecer Alegria, 40, who cares for his ill mother and hopes for improvements to the overtaxed healthcare system.

Colombian financial markets have been jittery amid fears that Petro's plans will damage the economy. Of special concern is a proposed ban on new oil development. But the incoming president has constructed a broad congressional coalition to pass his platform, including a $5.8 billion tax bill to fund social programs.

"We have the challenge of fulfilling the social programs that have been proposed," Diego Guevara, the new vice-minister of finance, said this week.

"The issue of employment worries us.... We really can't be happy that there is good (economic) growth when unemployment figures are in double digits," he said.

Other Colombians are more reserved in their expectations of Petro.

"I think there could be many obstacles, from the history of the left in Latin America and because people are scared of what they don't know," said self-described leftist Juliana Pade, 33, in the city center. "It is difficult to believe in politics ... but I think this could be a change."

"Those of us who didn't vote for him certainly have worries, because I don't share many of his ideals," said Daniela Giraldo, 23, in northern Bogota.

High cost of living is top of her mind, said Giraldo, who works in public relations. She also wants to see progress in education and peace efforts.

"If he's going to be the change, hopefully he will be, and will do it well," she said.